This 1958 Chevy Viking 40 With A Duramax Powerplant Is A Diesel Lovers Dream Ride!

This 1958 Chevy Viking 40 With A Duramax Powerplant Is A Diesel Lovers Dream Ride!

There has to be a word to describe this build, but “cool” or “badass” just don’t ...

There has to be a word to describe this build, but “cool” or “badass” just don’t quite have the impact needed to really get the point across how cool and badass this thing really is.

This thing, of course, is a 1958 Chevrolet Viking 40 pickup. The Viking line was the name given to Chevy’s medium-duty trucks in the Task Force series, and feature timeless styling and a solid platform that was known for durability. Of course, this particular Viking has undergone some serious changes to reach its current state of awesomeness, and in this clip, the truck’s owner discusses the major talking points about the build and how it became this ridiculous ride we see here.

As with many of our favorite builds, this truck was a “barn find”, only instead of being tucked away inside a barn or garage, it was actually sitting in a field. This gave the truck’s new owner a chance to showcase his product, a rust-removal compound known as EvapoRust. The EvapoRust stripped away the decades of rust, leaving a clean slate of bare metal, which was then clear-coated to preserve the patina and weathering, which certainly adds to the overall appeal of the build.

From there, the truck went insane. The most obvious alteration is the bed, which was removed and traded for a custom rear end that looks much more like a big rig than a medium-duty pickup. This was necessary, however, because the chosen engine, a 6.6 liter Duramax diesel, wouldn’t fit under the hood, so they moved it behind the cab.

The truck’s interior is also one of the cooler aspects of the build. A completely modern interior awaits the driver, although the custom install does have a bit of a classic flair, combining the best of today’s materials and tech with the undeniably cool styling of the 50’s.

Hit that play button and check this thing out for yourself. It’s an insane ride, for sure! 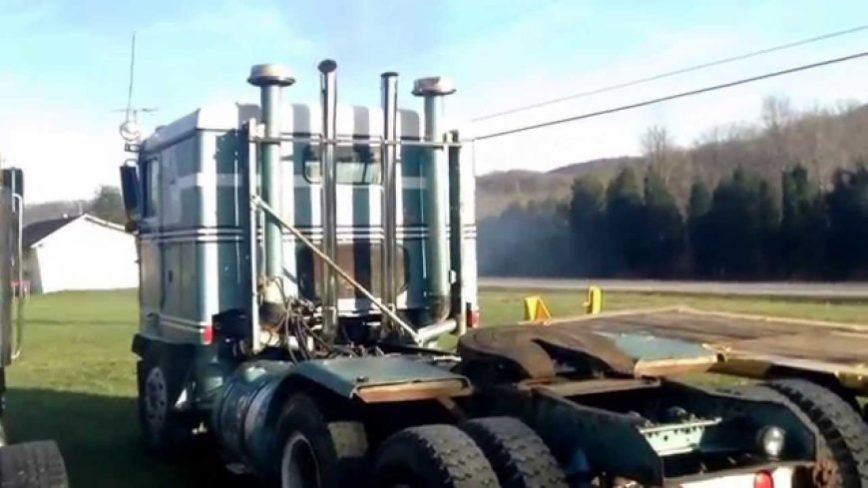