If you close your eyes and play this video, I have a feeling you’d be more likely to ...

If you close your eyes and play this video, I have a feeling you’d be more likely to guess you’re hearing an F1 car instead of the actual star of the video, a wicked radio controlled airplane. However, when you see how fast this plane is flying, you’ll understand why your ears deceived you.

The Big Monster from HJK Speedwings is an RC plane built with the express intention of breaking speed records, and we have to assume these numbers are some kind of record because they’re insane. The plane is propelled by a single electric motor with a prop, which surprised me. I expected a plane capable of these speeds to be powered by a miniature turbine – yes, that’s a thing, look it up, they’re really cool too – so seeing a plane ripping off speeds of three hundred plus miles power hour with only a single prop motor is pretty hard to wrap my head around.

However, as soon as the pilot tests out the throttle before launching the plane skyward, you get the idea that this thing is not to be taken lightly. Instead of the typical buzzing you hear from radio-controlled planes with prop engines, this thing screams to life and makes it clear it means business. As soon as the plane is tossed into the air, the pilot takes over and the plane soars high into the sky.

The man at the controls sends the plane into a series of climbs and dives, making a giant “U” shape in the sky, the Big Monster screaming past the onlookers at over 300 MPH! After several passes, the pilot clicks off the power and brings the plane in for a picture-perfect landing on the grass as those gathered to watch cheer him on.

To put this in perspective, this plane is moving faster than any F1 car on the planet and would be a great top speed duel for a top fuel car. That’s pretty incredible speeds for something you can hold in your hand and control with a remote from hundreds of feet away. 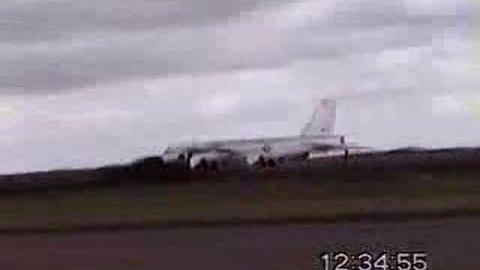