When you think of bikes doing wheelies and other stunts, you don’t usually picture ...

When you think of bikes doing wheelies and other stunts, you don’t usually picture Harley’s, but there are definitely plenty of Harley riders out there that do stunts on their bikes. And, just like the guys and gals who do tricks on their sports bikes, there are plenty of fails when things go wrong. Luckily, it seems like there is always somebody around with a camera rolling to capture the carnage, and as long as nobody gets hurt too badly, they’re pretty hilarious.

This compilation features a gnarly assortment of Harley riders screwing things up for themselves and others when they take their stunts just a little too far and lose control. There are several highway wheelies that end very badly, including one that could have gone horribly for the rider with his crash being in such close proximity to the steel guardrail. There’s also a little winding road riding that ends with the bike sliding off the road and into the grass, and some parking lot shenanigans that end with crunching metal and road rash. Keep an eye out for the guy who walks a wheelie right into the back of one of his fellow riders at a red light, as that is definitely one of the worst crashes in the video.

One thing we have to point out is how little safety gear some of these guys are wearing. We understand that you want to look like a badass, but I don’t remember ever looking at a rider in leathers and a helmet and thinking “That guy would be so much cooler if he rode with jeans and no shirt.”

Get some gear, wear it 100% of the time that you’re riding, and protect yourself. Your ego might still take a hit, but at least your body will be much better protected. 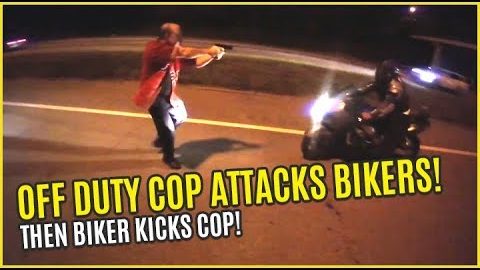