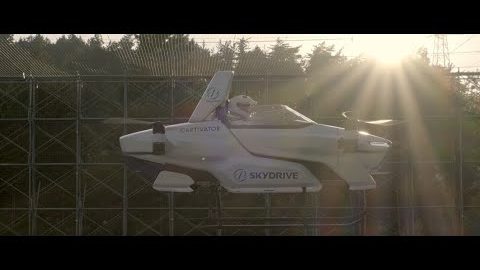 With the direction and speed that technology has improved at, we truly never know what’s coming next.

Just when we think we have the market pinned, along comes an innovative somebody to really change things up a bit. This is especially true when it comes to transportation. I’m not sure that there are many of us who had expected the shift to electric vehicles to blow up as quickly as it has over the past couple of years. With this evolution in mind, who knows what’s coming next?

If we take a look back at the predictions for the future of traveling, I think a lot of folks would’ve thought that we might have some more progress in the world of flying cars by now. As the timeline would play out, that just simply hasn’t been the case.

However, there have been some folks who might have been working on the technology behind the scenes. With that, last Friday would see the first legitimate attempt at the venture. A Toyota-backed startup by the name of SkyDrive headed to the sky with the SD-03. The flying car of sorts took to the air around the Toyota Test Field. While there have been talks about it being autonomous, there was a pilot present for this attempt.

The eight-rotor craft is said to be able to operate safely, even with motor failure. The overarching concept is to provide an alternative for travel in urban areas as to eliminate traffic. While the approval for flights outside of the test field might happen by the end of the year, it’s forecasted that a commercial machine won’t be coming until 2023 or so.

By following along below, we take a ride along with what could potentially end up being the future of transportation as we know it. One day, we’re paying close attention to the latest development and the next, those developments are completely in the rearview.

« This Mansory Package Doubles the Price of the Lamborghini Urus – Worth It?