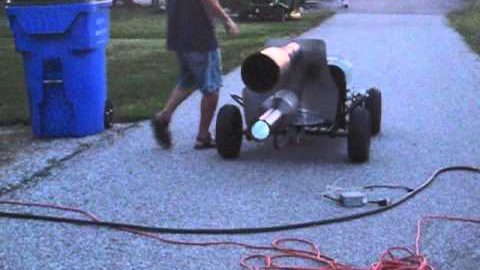 The consensus is split here at Speed Society as to whether or not we’d be willing to strap into this thing, even though it doesn’t appear to be that fast, it seems like the potential is there for this thing to possibly to take flight at any given second if the things were to go haywire, and we aren’t sure exactly how that would end. However, the guy who built it doesn’t seem to be too be too concerned, willingly jumping on the kart and taking it for a spin around the neighborhood with the pulsating engine making that distinctive noise as it rolls down the street. While we admire his confidence in his kart and his driving abilities, we do wish the rider would have at least worn a helmet while tooling around the neighborhood, as there is no accounting for all of the things that can possibly go wrong, especially when you’re driving on public roads with other drivers.

We aren’t sure how much speed this thing would build if it was turned loose at wide open throttle on a long straight away, but we would certainly love to see that video, as long as the rider takes all safety precautions and maybe even builds a roll cage before taking to the desert for a top end run. Until then, we’ll be content to just watch this thing belch out these massive fireballs when the rider is trying to fire off the pulse jet, then him taking off down the road when it does fire. These are some awe-inspiring fireballs that light up the sky before the ignition catches and the pulsing engine roars to life.

« The Best Miniature Cars, Trucks and Buses With Badass Engines!