This Driving Simulator Costs a Staggering $50,000! 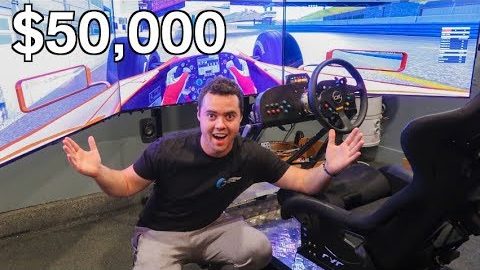 Parker from Vehicle Virgins gets to do all the cool stuff, and since he takes us with him everywhere he goes with his YouTube channel. In this video, Parker heads to a friend’s house to check out his insane driving simulator, which cost $50,000!

The simulator features an authentic driving seat, three massive wrap-around monitors, a force-feedback steering wheel and pedal setup, and killer surround sound. The most insane part, however, is the ridiculous hydraulic lift setup that actually moves the seat to provide the most realistic driving experience possible without actually strapping yourself into a racecar. After watching his buddies take turns in the sim, Parker decides to jump in and give it a shot, with pretty disastrous results. However, Parker is a pretty good sport about how badly it goes, laughing at himself as much as his buddies are.

He even tries his hand at drifting, but knows going in that it’s going to end badly, and it certainly doesn’t go any better than his racing experience behind the wheel of the simulator.

From there, things take a bit of a crazy turn, with Parker’s buddy doing a massive burnout after they leave, only to get stopped by the cops after the smoke show. Then a few moments later, Parker and company get pulled over as well for going 85 MPH when they were cruising along below the speed limit. However, the cops check everybody out, make sure the driver wasn’t drinking, and turn them loose with a warning. Then they get behind a drunk drive who’s swerving from lane to lane and generally being a danger to everybody around him, so Parker does what any good citizen would do and reports him to the authorities, who hopefully picked hm up before anybody got hurt.

No big deal here, just another day in the life of our favorite Vehicle Virgin!

« Guy Puts a Tesla Motor in a Lotus Evora and Slaps it on the Dyno!