This Electric Bait Bike Prank In The Hood Is Brutal… Is This Even Legal? 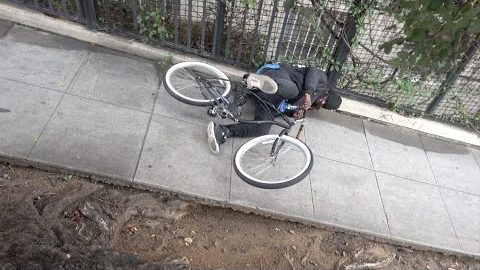 Ever since police began using bait cars to lure would-be thieves into the waiting embrace of their handcuffs, we’ve seen plenty of people jump on board the concept with their own versions of instant justice for scumbag thieves. Almost overnight, there was a host of channels dedicated to using bait bikes with various forms of built-in pain inflicting punishment to ensure the thieves immediately regretted their decision.

We’ve seen bikes perched atop a hill with the brakes disabled, bikes anchored by a wire that stops then dead in their tracks after so long, and even bikes equipped with a torch under the seat to burn the perp’s bum as soon as he attempts to take off with the bait. And now, there’s yet another twist on the concept, this one perhaps the most diabolical of all. These pranksters have set up a bike with a remote controlled stun gun under the seat and seem to have wired the charge into the frame of the bike as well, ensuring the thieves get a shock in the butt and one in their hands when the button is pushed on the remote.

Once the bike is placed in position and the cameras are ready, all they have to do is wait, and they don’t have to wait long. Several miscreants grab the bike and hop on, looking to score an easy win and take off with a new bike of their own. However, they don’t get far before the pranksters hit the button and send a nice jolt of juice through the bike, and subsequently the thieves’ bodies. Most of them just hop quickly off the bike with a few choice words, but a couple of them seems to lose control of themselves and the bike. One of them even rides right into the shrubbery and nearly hits a tree, which would have certainly added injury to the insult. We aren’t sure if any of the thieves were injured, but since they were stealing things that didn’t belong to them, does it really matter?