This Hayabusa Rider Is Allergic to Slow… One Fast Chick! 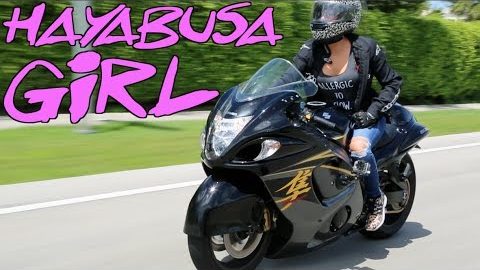 There are a few things in this world more attractive than a beautiful woman who rides, drives or otherwise operates a badass ride. From Pro Stock world champion Erica Enders to Pro Stock Bike badass Angelle Savoie to Speed Society Racing driver Leah Pritchett, there are countless badass woman in and around motorsports who aren’t just there to look pretty, and pretty soon you may be seeing “Sexy Lexi” listed among these women who kick ass on and off the track.

We first met Lexi a while back when she ran up on these guys out doing acceleration testing in their Hellcat. Lexi, aboard her Suzuki Hayabusa, absolutely blew the doors of the 700+ horesepower Challenger, then stopped to chat with the guys about it afterwards. She was reluctant to reveal what all was done to the top-end monster ‘Busa, but as you’ll see in the video, it’s really not that heavily modified. This just goes to show you how well Suzuki did when they built the Hayabusa, producing a bike capable of outrunning almost anything in totally stock form.

Lexi’s ‘Busa features a few mods that help more with delivering the factory horsepower instead of upping that number, although it does feature a full host of bolt on mods. She’s also added a quick shifter to let her spend more time with the throttle pinned wide open, changed the gears to her liking, and strapped down the front end to keep it tucked under acceleration. She chose a more aerodynamic front fender to help with airflow at high speeds, and all of these mods were taken into account when the bike was tuned by ACE Performance. We don’t have any numbers as far as horsepower or drag strip performance, but there’s no doubt this thing hauls butt and would likely be in the 9’s in the quarter if Lexi ever decides to hit the quarter mile. You can easily see in the footage that Lexi is an experienced rider, tucking nice and tight and letting the Hayabusa run through the gears.

All of that in an attractive package makes for a great video!

« Fake Conor McGregor Hits Hollywood in a Bentley and Gets SWARMED!