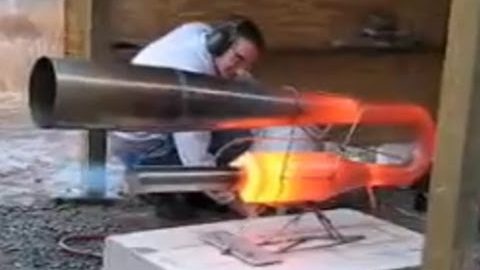 When it comes to cool technology that seems to work by magic, there are few things cooler than a pulsejet engine. With no or very few moving parts, a pulse jet can actually create thrust! Using a small propane tank for fuel, the jet can be throttled up or down by controlling the density of the fuel. If the tank had low pressure, the vapors will keep the pulse running at a low speed. Run up the pressure and the output increases. Switch over to liquid propane by inverting the tank and the throttle kicks into wide open.

Based on the intense yellow-orange glow of the metal, one would assume there is nothing but scorching hot gas pouring out of the pipes, but the YouTuber who built it says the exhaust is actually fairly cool at lower throttle levels. While that obviously changes as the throttle is ramped up and the metal heats up from one end to the other, an obvious indicator that the cool air is gone, replaced by the expected scalding heat spewing from the exhaust. You can see the throttle level oscillating rapidly when the propane tank is inverted and the fuel inside sloshes around, changing from liquid to vapor rapidly and causing the jet to buck on the stand a bit.

When the fuel is all gone, the flame burns out and the engine falls silent, leaving nothing in place of the trademark pulse jet hum. We’re not going to go so far as to suggest you guys build pulsejets of your own, but there are instructions available online that just might tell you how you can build one of these things in your own back yard. So IF somebody out there does happen to do so, we do have to recommend you do not, under any circumstances, use your hand or any other body part to check the temperature. But do get video, you know, for scientific purposes.

« The Last Thing You Want To Hear When Working On a Turbine Engine!