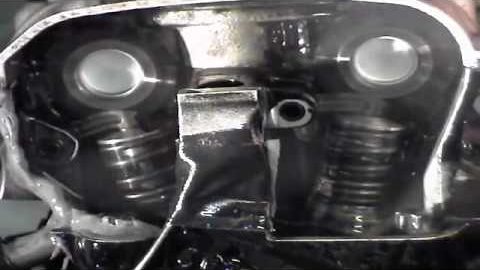 When it comes to being able to see what’s inside of an engine, short of visualizing it from what you know about working on the engine or seeing some sort of animated graphic, most of the time, it would probably be pretty difficult to be able to see exactly how the parts that you installed are working and cooperating with one another in order to make power. I mean, after all, pretty much every engine that you’re ever going to come across that’s running is probably going to be sealed up with the parts hiding behind metal covers that won’t allow you to see what’s going on within.

This time, however, we get a chance take a unique look inside of an overhead cam engine as it rotates to 14,000 RPM, firing up and really making those springs work hard as the motion happens faster and faster until you can no longer even see the compression happening and instead, just have to sit back and watch the action as it speeds up and keeps on rolling with a head of steam, creating a show that’s a little bit too fast for the human eye to perceive in real-time. With that much RPM, an engine like this would absolutely be screaming if it were under a load!

Follow along with the video below that will help you get a unique perspective inside of an engine, a perspective that’s unlike any other. With something like this, you will no longer be wondering exactly what it looks like inside of your powerplant the next time that you speed it up and give it some juice, really cranking over those rotations per minute. If you’re getting this unique perspective of an overhead cam engine from the inside, be sure to tell us what other kinds of engine internals you would like to see at work.

« How Accurate is the Tesla Auto Pilot? Curve of Death Test Run!