This is What Happens When a Customer Refuses to Pay! Wild REPO Truck!

This is What Happens When a Customer Refuses to Pay! Wild REPO Truck!

When it comes to making sure that those bills are paid up on time, you had better ...

When it comes to making sure that those bills are paid up on time, you had better watch who you’re delinquent to because sometimes, when you don’t pay for the services that you’ve been rendered, some people take it in their own hands to make sure that they get their money’s worth. This time, we check out some a collection of people who decided that, after being shorted on pay, that they were going to go after revenge instead of trying to get their money. I guess that if you’re pretty sure you’re not going to be paid, taking back your services is a way to soothe yourself.

Instead of continuing to bother these folks about paying their bill, they just decided that they would reverse the services that were supposed to be rendered. One of our favorites here is where it looks like one lady rented a dumpster and left it for collection without paying. Instead of just collecting dumpster and taking the trash, absorbing the hit that they would take from not being paid, these guys decided to pick up the dumpster and unload the entire thing in her garden. That’s certainly going to be quite a shock when she discovers what happened with the waste that she thought was going to be carried away.

In another situation, we see contractors ruining work and furthermore, a car being taken back after being picked up by the roof, just to name a few in this compilation. I guess that this is one way to handle your issues and even the score in order to curb that frustration. Others might argue that there are more civil ways to take care of problems like this, so be sure to sound off and tell us what you think of the way that these “professionals” handled the issue at hand. Are you on their side or would you be raising hell if you were one of these customers? 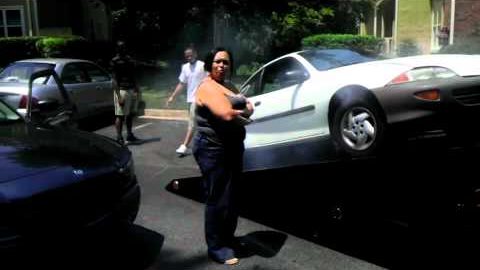