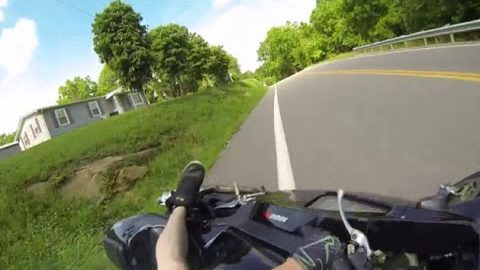 This one comes with a big old *WARNING* label plastered on it because what you see here is about to get graphic. However, by seeing something like this, people might be able to help themselves whether it be to remember to strap up with some more safety gear or perhaps look out for motorcyclists when they’re behind the wheel of their car or truck

When it comes to riding a motorcycle, it’s a good idea to put on your safety gear each and every time you head out for a ride. It’s pounded into your head over and over again for a reason because when you don’t, well, there’s absolutely no limit as to what could happen. We’ve all seen it in some capacity or another.

This time, we catch up with a rider who had the unfortunate experience of coming head-to-head with the situation that involves no safety gear at all. We’re able to watch from the first-person point of view as a GoPro camera captures the entire sequence from the moment that the rider goes down all the way to when he gets home to assess the damage which looks to be pretty ugly as he appears to have been rolling without even wearing a shirt as he cruised in his bathing suit on the motorcycle.

While the crash went down at a low speed, the damage was still done and it was done in a pretty ugly fashion as the lack of safety gear left this guy torn all up from the neck down.

Check out the video below to see the carnage that followed up the wreck, but we have to say again to proceed with ultimate caution because it really does get a bit graphic. This guy is insanely lucky that he wasn’t going faster when he got thrown off of the bike.