This is What Valve Float Looks Like From The Inside! 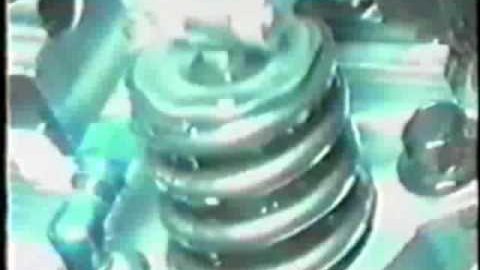 Until now, trying to visualize valve float has been an exercise in using your imagination, as the phenomenon would be nearly impossible to capture on camera with previously-available video technology. However, we have some footage below that helps tell the story behind the power-robbing issue and has helped lead to ways to prevent it.

When simplified, valve float is exactly what you’d think based on the title: an engine’s valves actually floating instead of opening and closing as they’re designed to do. This occurs at high engine speeds and makes the engine less efficient, create greater emissions and causing a drop in power. Beyond that, valve float can also cause catastrophic engine damage should the valve come in contact with the piston. The phenomenon also causes undue stress on the valve train and can lead to parts breakage in any of several valve train components.

Diving into possible remedies, the most obvious answer is to use a stiffer valve spring, which should provide greater force on the valve and keep it closed when it is supposed to be. This too, however, adds stress to the upper engine components, leading again to a risk of valvetrain parts breakage due to the added stress, as well as causing a loss of power due to the increased friction. Another viable option to remedy the situation is running lighter weight valves, especially if used in conjunction with correctly-spec’d valve springs, although as with most components, lighter weight can lead to a shortened life span and higher cost. The key is working with a professional to choose properly matched components that work together to effectively remedy this problem.

Meanwhile, check out this incredible footage and just think about the stresses and forces at play to cause a valve spring to actually rotate around the valve as the engine speeds ramp up. If you’ve ever tried to install or remove valve springs, you know the pressure involved is tremendous, making this footage all the more amazing to watch!