This Junked Diesel Engine Has One Crucial Rare Part

This Junked Diesel Engine Has One Crucial Rare Part

You know what they say, one man’s trash is another man’s treasure and ...

You know what they say, one man’s trash is another man’s treasure and just because someone has given an engine all that it could handle and eventually blew it up doesn’t necessarily mean that someone else won’t be able to come in and salvage parts of that engine so that said parts can work on a new project.

Now, if there’s any community that is going to take trash and make it treasure, it would definitely be the rat rod community as this world has been built off of taking parts that seem to be ready for the trash pile and repurposed them so that they can become something else entirely that will be worthy of the right kind of attention.

This time, the guys of Las Vegas Rat Rods chase down an engine in one of the more unconventional places that you’d find one. Instead of heading to a junkyard or somewhere else with a bunch of dead trucks, this diesel engine is coming straight from a ski resort as it has been used to power ski lifts for all of his life until a hole was punched in the side of the engine block.

Check out the video below as the guys are able to scavenge a part or two off of the engine that makes it worth a good amount of money even though most of it is pretty much toast! If you know a lot about how these things work, you can definitely head out there and find yourself good deals when people think that all they have left is trash.

Trying To Start a junk Yard Deisel Engine - Will it Start? 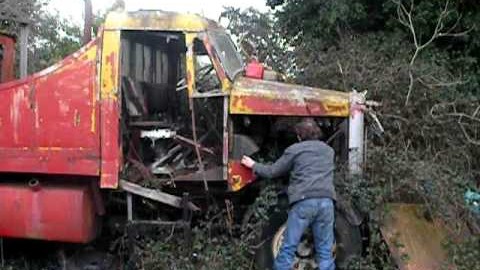