Some of our favorite videos on the entire internet are barn find videos. We’ve seen ...

Some of our favorite videos on the entire internet are barn find videos. We’ve seen some of the most ridiculous finds that may have been pulled out of a barn or field or abandoned garage and ended up being worth six figures when it’s all said and done. We’ve seen everything from one-of-a-kind Ferraris to ultra-low-mileage Buick Grand Nationals, all in various states of disrepair.

This 1969 L78 Chevelle is actually in surprisingly good shape, even cranking up and driving out of the barn under its own power. The car sounds amazing, and though the description claims the engine is a 375 horsepower 396” big block with a set of original “snowflake” heads, but it certainly sounds like the previous owner swapped out the cam for a much larger, more aggressive camshaft because this thing sounds downright nasty.

Underneath, the car is riding on a 12 bolt rear end with 3:31 gears and a PosiTrack unit mated to an M20 4-speed transmission which would make this torquey big block a blast to drive, especially on the aftermarket wheels and tires that should help hook all of that American muscle when the driver drops the hammer.

The body is clearly weathered after being in storage since the 1980’s, but appears to be in pretty good shape and wouldn’t require too much TLC to restore it back to is former glory. Or, the owners could just leave it like it is and only repair what’s needed to put the car back on the road and go have some fun with it as a bit of a sleeper, if a Chevelle could ever sneak up on anybody that is.

Tell us about your favorite barn find story, whether its one of your own or just one that you’ve heard. We’d prefer them be true, but honestly some of the best tales are the ones that are a little too good to be true, so tell us those too! If you have video, send us a link and we just might share your tale as well! 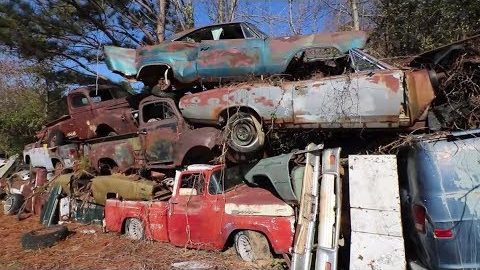