This Mini Cooper Has a 640 HP Jet Turbine Engine! 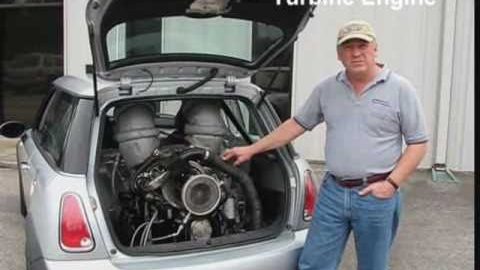 When it comes to going fast, the golden rule is to add power and subtract weight. In theory, if you do this correctly, this should be the master formula that’s needed to have yourself a pretty fast ride once all of the other details get dialed in.

The builder of this Mini Cooper was off to a good start by picking a car that was already light weight to start with, but what he did next was where the magic happens. Seriously, we’ve seen some wild and off-the-wall engine swaps but I can’t say that anything like this has been done before!

Instead of simply tuning the car’s current engine or even doing some sort of traditional swap with another car’s engine, this owner took it upon himself to implement a jet turbine. That’s right, you’re currently witnessing a Mini powered by jet power!

When all is said and done, this Mini Cooper makes somewhere in the ballpark of 640hp and is able to take off like a rocket! Basically what we have here is a fancy, overpowered, street legal go-kart! Be sure to head to the video and check out the build for yourself below!

« If You Weld This WIll Make Your Day! S*#t Welders Say