This Parrot Likes Taking Runs On An RC Drift Car 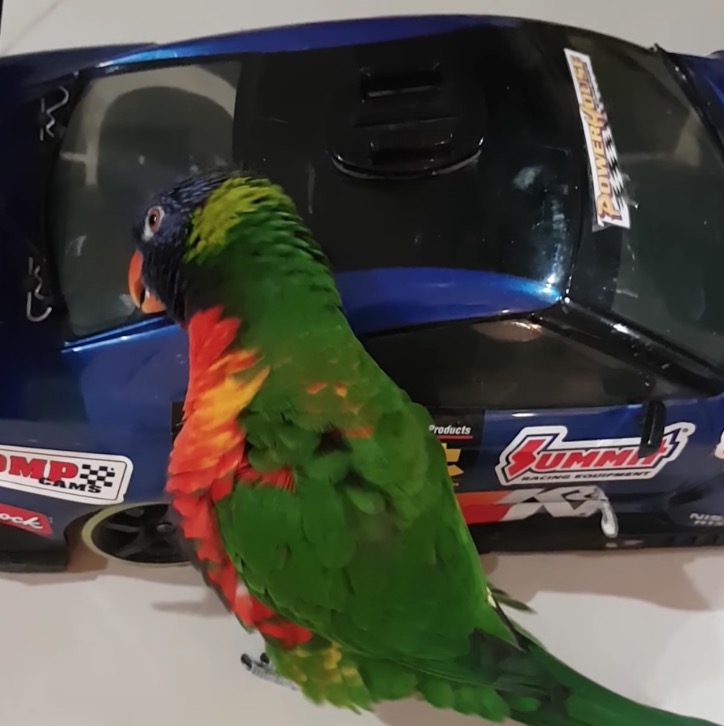 You might have seen some cool stuff so far today, but I am pretty sure you haven’t seen anything as cool as a bird that loves to drift? Well that’s exactly what we have for you today, and it’s hands down one of the coolest things I’ve seen in a long time! Larry the Lorikeet loves drifting, and I don’t mean he likes to watch, he likes to actually hop on board and go for a spin himself on his owners radio controlled drift car.

After chasing the car down and giving it some love, Larry’s owner convinces him to perch on the big drifty car’s rear wing and then wastes little time in setting off, slinging the rear end out all around the room, with Larry hanging on for dear life. It looks as if he has no problem hanging on, despite the car whipping some pretty gnarly donuts and spins that seem like they’d send Larry flying, quite literally, off of his pedestal.

When the ride finally comes to an end, Larry shows the car some more love by laying his head atop the car’s body. It’s hard to say if this is genuine affection or of it’s just learned responses to riding the car, but either way, it certainly looks like the beautiful bird loves his mobile perch.

I’ve seen Lorikeets in zoos before, but they’re actually native to Australia, where this video was taken. I can’t imagine seeing a bird this beautiful in the wild, but I’m sure our friends Down Under aren’t really that enthralled by their beauty, since they seem them regularly in the wild. Lorikeets are a part of the parrot family, and do mimic sounds they hear regularly, including words and phrases. They make good pets, but do require a bit of attention and room to move, as they’re rather active, but for those who have the time and patience to spend with them, they’re great companions.

We’ve seen water skiing squirrels and a dog who loves to watch the races, but I think a drifting lorikeet is way cooler, because drifting!