This Turbocharged Donk Shows How Versatile It Can Be! Big Wheels Or Radials, It Gets Down! 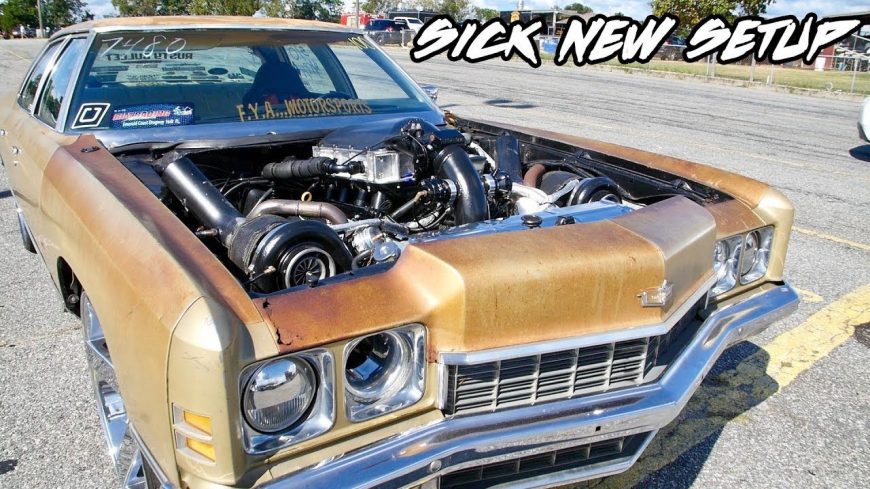 Most of you know by now that we have a lot of love for sleepers, and now that they’ve dug out their own niche in the drag racing world, we love donks too! So finding this car, that is a whole lot of both, we just knew we had to share it with you guys.

Our buddy Justin Malcom from the JMalcom2004 channel headed down to Florida where the racing never stops to get some fresh footage for his audience, and he caught up with Rusty Bullet, the donk you see below. If this car had a hood on it, you’d have no idea looking at it from the outside that there was a wicked twin-turbo LS powerplant resting between the framerails. The big four door family cruiser wouldn’t attract the least bit of attention if not for the massive chrome wheels, at least until the driver romped on the gas and the turbos spooled up and announced that all the horsepower had arrived.

One thing this car has that I haven’t personally seen is the intercooler that bolts directly to the top of the intake. Typically, with turbocharged setups, you see a front mount-style intercooler mounted down low in the grille oepning. This style bolts right to the intake and, while it does add quite a bit of height to the engine itself, it should also add quite a bit of horsepower by cooling the incoming air considerably. I’ve seen this type of intercooler used on blower applications, but never with a turbo setup, although the principle is the same.

As you can see, the little boosted LS powers the car to some stout looking passes. It’s hard to judge just how quick the car is since the scoreboards are turned off, but based on how easily it takes down the cars in the other lane, it’s obviously moving out downtrack.

The last pass, the driver opts to bolt up a set of drag radials on 16” rims to see how the car does, and you can hear a noticeable difference in how quickly the engine builds RPM, a product of the changes in the gearing caused by the much shorter tires. This is one cool ride, and as always, Justin catches some great footage!

« Hauling A Record Load! It Took How Many Trucks??