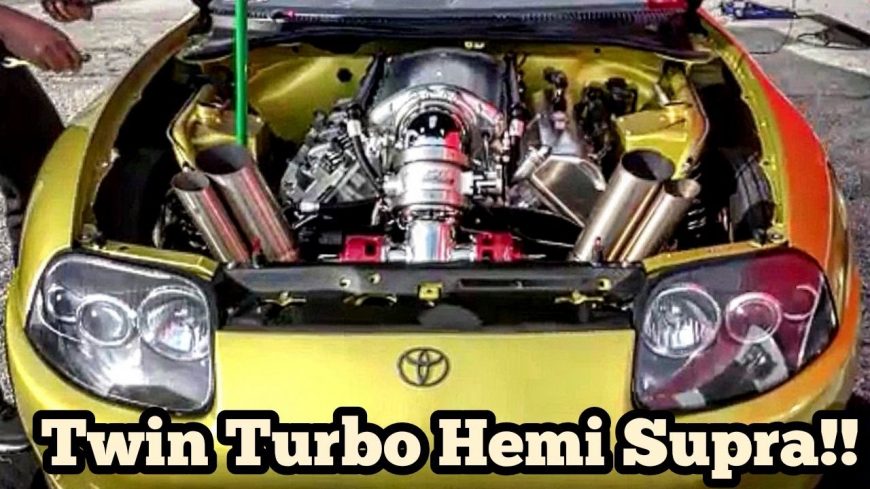 Engine swaps are so common these days that you rarely see a swap that really gets your attention. I’ve seen LS engines used in pretty much anything you can think of, and I’ve seen Mustangs with just about any engine you can think of swapped out for the factory power plant. There’s one particular car that you just don’t really see swaps done on, though, because it’s such a legendary platform the way it came from the factory.

Toyota’s Supra, specifically the fourth generation, is quite literally one of the most sought-after cars ever manufactured. It’s bulletproof 2JZ-GTE engine has been known to crank out well over 1,000 horsepower on the stock engine without internal modification, making it easily one of the most beloved powerplants to have ever graced an engine bay.

That’s why the car featured in the video below has drawn so much attention. While the iconic Mopar Hemi is certainly high on the list of vaunted powerplants as well, you just DON’T swap a Supra. But the owner of this car, a man know simply as Dui, decided to make waves by dropping a twin turbo Hemi under the hood of this greenish gold fourth gen Supra known as Wasabi. The car is driven by Zack Parks and made the trip to Texas for Project X Productions’ Winter Meltdown.

The car stumbles a bit off the line in the first pass of the small tire shootout against La Criminal, a well-respected S-10 in the small tire world, but comes back later that night for a grudge race against another boosted pickup truck. This time, things go according tie plan for the Hemi Powered Supra and Parks lays down a ridiculously quick looking pass. The scoreboards are off but there’s no doubt this thing is running some great numbers on the track. Maybe one of these days we’ll find out for sure, but until then, we’ll just watch the haters squabble over how ridiculous this combo is.