This guy and his family clearly have a thing for rat rods! With three rat rod ...

This guy and his family clearly have a thing for rat rods! With three rat rod racecars and two diesel-powered pickups in the fleet, there is clearly an affinity for the genre that runs through this family’s veins.

The most eye-catching ride is the first one seen in the clip below from our friends at 1320 Video. With a hand built driver’s compartment, constructed primarily from wood, the stretched out hotrod has a PAIR of healthy sounding and strong running Ford 429’s that have been mated together to provide around 1,000 horsepower, which push the ratty ride through the 1/8th mile in less than six seconds. Besides sounding awesome and running strong, the extended-wheelbase ride has a certain appeal on the dragstrip, as it hearkens back to the days of front-engined dragsters, many of which hit the track with more than one engine crammed between the framerails.

The other hotrodded rat, the one with just one engine, actually runs better than the twin-engine combination, but a quick glimpse at the engine itself explains why that is. With 580 cubic inches of dual carbureted Ford loping away in the similarly constructed chassis, this setup probably makes close to the same power without the added weight of a second engine and the stretched frame. Of course, compared to the 16 cylinders of the other car, it’s just not quite as high on the cool factor scale either.

Possibly the coolest rig in the fleet, the diesel powered tow rig fits the theme of the race cars perfectly, while effortlessly towing both cars to the track on the stretched trailer that was also hand built at home. When the cars are loaded up on the trailer, it’s quite the rat rod parade, each of them with their own unique look, but all obviously following the same theme. There is also another rat rod drag car at home that is driven by his daughter, plus the guy’s daily driven diesel rat rod. Needless to say, this whole family is involved in the rat rod movement! 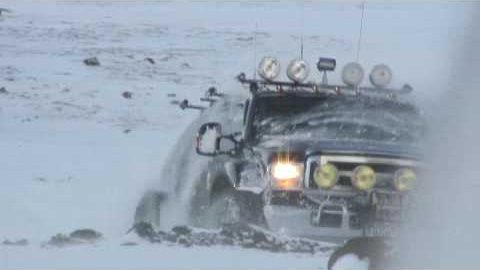