The infamous Big Red Camaro is one of the most popular and widely-recognized muscle ...

The infamous Big Red Camaro is one of the most popular and widely-recognized muscle cars of all time. Banned from La Carrera Classica for being too dominant, the wicked F-Body has long been a force to be reckoned with on open road racing across the nation.

Driver R.J. Gottlieb and the Big Red crew decided to let the Camaro stretch it legs at the Mojave 1.5 Mile Runway Challenge in 2015 and the monster did not disappoint! Taking to the lengthy stretch of pavement in the California desert, Gottlieb eased the torquey coupe off the line, then unleashed the ProCharged ponies and the not-so-aerodynamic Camaro blasted through the heat, topping out at an incredible 251 MPH! Many early muscle cars have stability issues at speeds over 160 MPH, but thanks to a custom NASCAR-style chassis and a few key aerodynamic modifications, Big Red stays firmly planted on the runway and shows zero issues with stability, even as it reaches and exceeds 200 MPH!

Big Red suffered significant damage from a fire, but the crew is working diligently to return to racing in 2017, when they plan to tackle the imposing Pike’s Peak as well as taking a shot at bettering their top speed of 251 MPH!

Two Prochargers In One Mustang... How Does That Work? 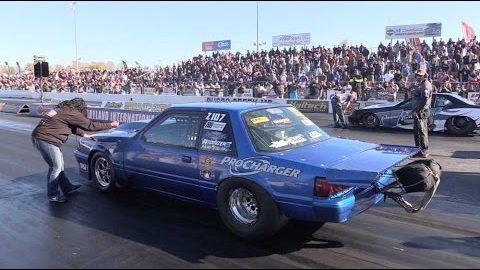