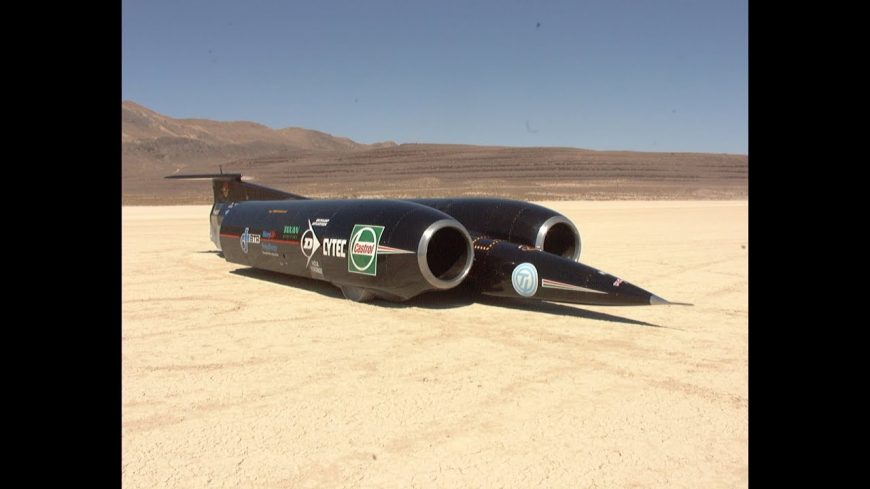 Twenty years ago, the first earth-bound vehicle to rack the sound barrier screamed across Nevada’s Black Rock Desert and raced its way into the record books and the hearts of kids young and old everywhere who had imagined a day when a car could literally outrun sound. The Thrust SSC was designed by Richard Noble, Ran Ayers, Jeremy Bliss and Glynne Bowsher and driven by Andy Green, a British Royal Air Force Wing Commander. Powered by two Rolls-Royce engines generating an estimated 50,000 pounds of thrust, the Thrust SSC looks more like a bullet with wheels, especially when it’s throttled up and streaking across the desert, leaving a trail of dust in the wake behind the ten-ton rocketship that seemingly stretches for miles.

Reaching a top speed of 763 miles per hour, the car broke the sound barrier on both trips through the timing beams, a requirement by the World Motorsport Council to validate the performance. In the twenty years since the Green blasted into history and the record books, exactly zero cars have followed the Thrust SSC into the supersonic category, leaving it the lone car to claim the distinction.

As he mentions in this awesome walk-through interview, Green didn’t simply drop the hammer and hold on tight for a few moments, he had quite a bit going on in the cockpit for the fourteen mile journey. The fact that he covered the actual measured mile in just four seconds is almost impossible to comprehend, but that’s how fast things happen when you’re traveling faster than a sound wave. This interview is a great inside look at what goes into keeping a car like this on the track when there are 110,000 horsepower on tap, cross winds and insane forces at play before the car finally slips into it’s own wind tunnel above the sound barrier and smooths out.