TikToker Who Quit Van Life After Gas Soared – Now Makes $4,000 a Month Living in Her Car 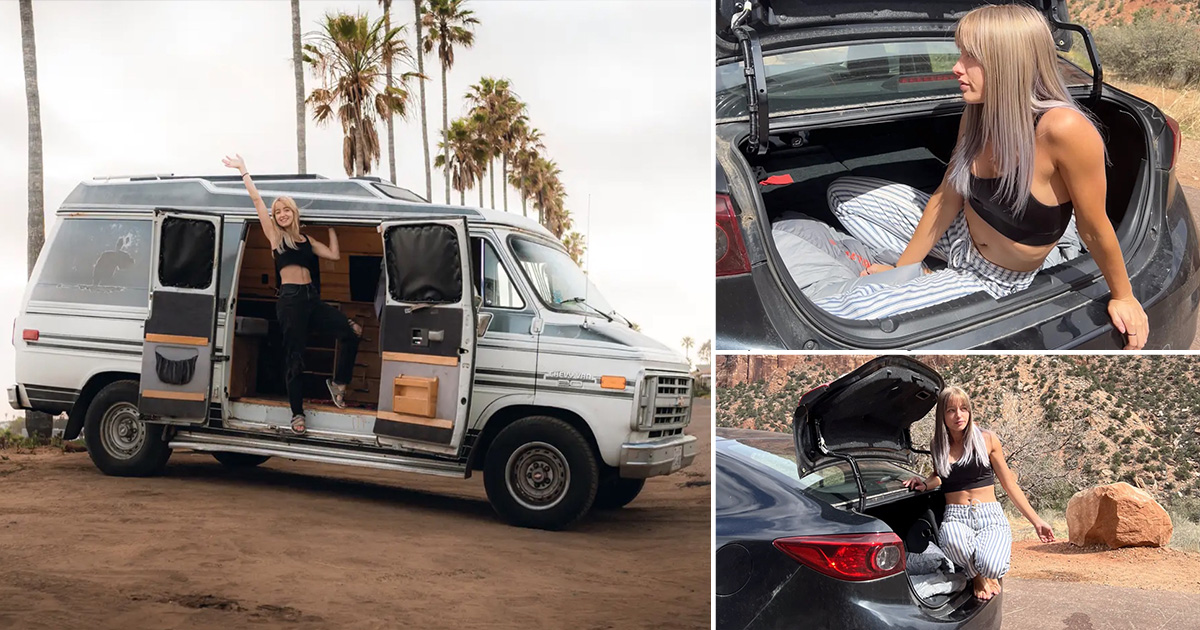 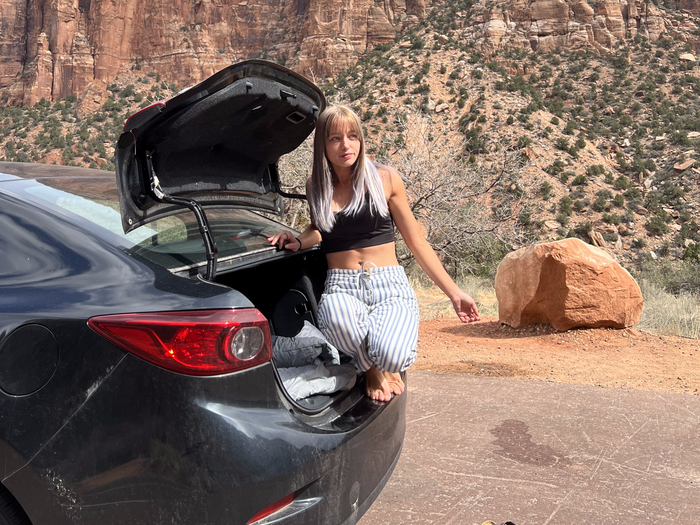 Billie Webb quit van life, but instead of going back to renting, she downsized again. Billie Webb

A TikToker quit her domiciled existence last year to join the van-life movement. Now, with a $4,000-a-month income stream and a clean slate of debt, she’s taken the plunge to live in her car. Soon, she’ll call a Tesla her home.

Billie Webb is a TikToker and content creator who has been traveling on the road for the past year, in a mix of her 1990 Chevy G20 van and her 2015 Mazda sedan.

Webb raffled off her van for $6 a ticket, selling nearly 2,900, before moving into her Mazda. Her master plan of living in her own Tesla continues to take flight.

Webb moved into her van as COVID-19 restrictions eased last year, citing steep rental costs and low pay in the various odd jobs she was working.

“I would even be declining going out with friends for lunch because I was very worried about not having enough payment for rent,” Webb told Insider. “But then I started meeting other van lifers who were also content creators and seeing how much they traveled, and I wanted to join them.”

Van life has become more popular amid the pandemic and rising rents and property prices. But it has backfired for some, with one nomad telling Insider that she became homeless after attempting to live in her van. Webb quit van life as gas prices soared, with her Chevy running at 7 to 10 miles a gallon and costing her more than $100 to fill up.

“I don’t know if it’s a very smart move for anybody to be living in a van right now, specifically if you are traveling,” she said. 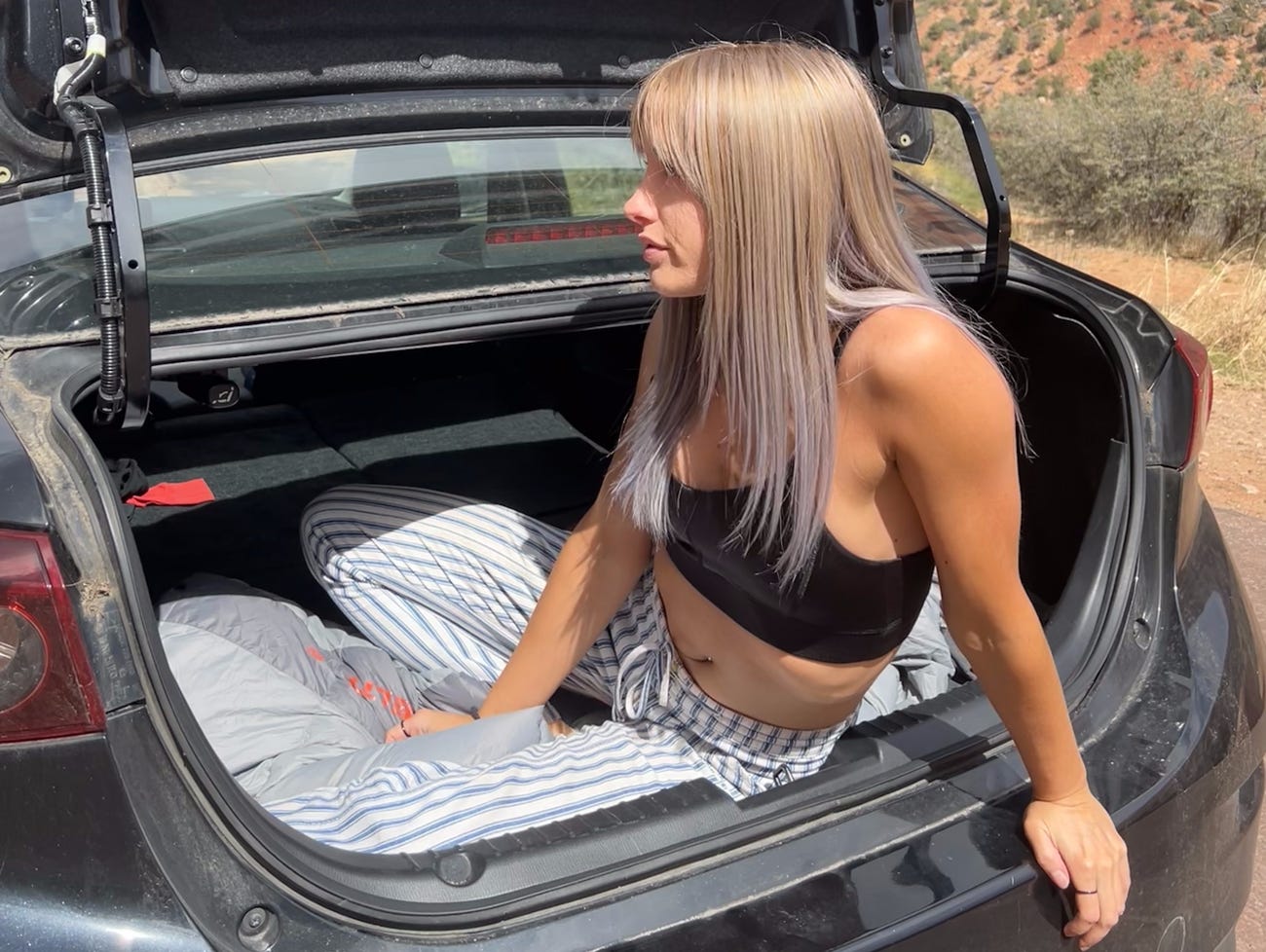 Webb now lives in a 2015 Mazda, where she lived before buying the van. Billie Webb

Living in a car, then, is a surprising pivot, given the small space, lack of amenities, and similar pressure from gas prices.

“Now I’m pretty used to it. So living in the Mazda, it’s not terrible for me. The only thing that I do wish was easier was the temperature,” Webb said.

With a $20-a-month Planet Fitness membership, Webb can shower regularly. Gym memberships are a must-have for anyone joining van or car life, she said. She sometimes house sits as well. The TikTok has been able to get rid of her car, credit card, and student-loan debt, amounting to about $10,000, as she avoided paying rent and built up a 700,000-strong TikTok following, which allowed to her pick up brand deals.

Webb makes about $1,500 from each brand deal she signs for her TikTok channel. She’ll typically do two or three a month focusing on car accessories. Her biggest deal recently netted her $5,000 for a partnership. The insider has viewed contracts and emails from her agent.

Camping in a Tesla

It hasn’t been easy switching back to a car. But despite the hotter temperatures Webb has had to contend with, she said: “I’m pretty low maintenance as a person, so I don’t, like, I don’t need a king-size bed. I don’t need a giant closet.”

But Webb hopes her difficulties will be over when her Tesla Model 3 arrives next month.

Tesla’s camp mode allows the car to regulate its temperature and airflow overnight, making it a more natural dwelling than her Mazda. It can make journeys far cheaper, too.

“Obviously, the gas bill will be much lower or nonexistent, the electricity bill will be lower than the gas bill, and the temperature problems will be solved,” she said. “It’ll be really cool — I’m very excited about it.”