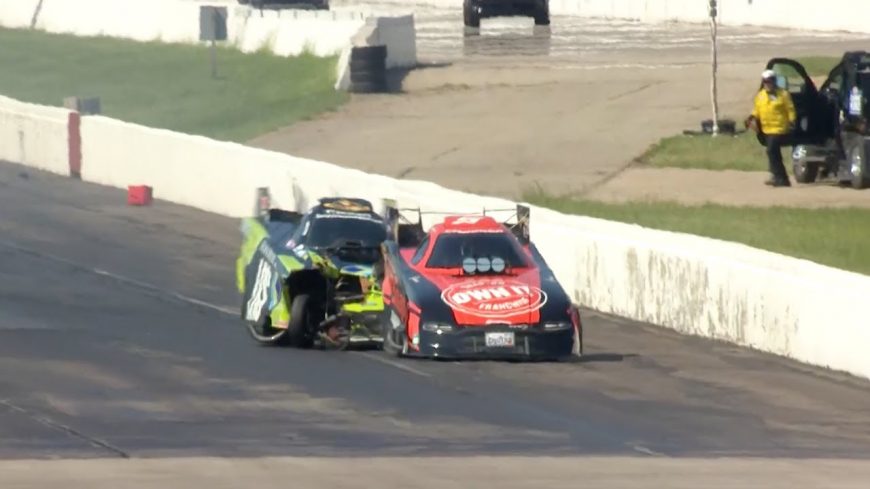 With tens of thousands of horsepower on top and cars that reach 300 mph, you never know what’s going to happen in a couple of seconds that it takes for Funny Cars to span the distance between start and finish.

While the race happens in a snap of your fingers, there are thousands of processes happening at once. Not only do drivers need to stay zoned in in order to avoid catastrophe but their equipment also has to stay together. With all of that stress on the mechanical elements, it’s certainly a tall ask and requires not only top-tier equipment but also a top tier crew to make sure that every nut and bolt is exactly where it should be.

This time, we tune in from NHRA’s Menards Heartland Nats as a couple of competitors ended up in a wild situation. When one car starts moving away from the appropriate part of the racing surface, our stomach goes into a knot and doesn’t leave that knot until well after the situation has sorted itself out.

In this particular spot, it’s Tim Wilkerson who experiences some sort of difficulty as his car begins to wander away from the dark part of the track where he would most like it to be. Generally, when cars end up out of the groove, things can get incredibly sketchy as machines have been known to end up going sideways after losing traction. Fortunately, that didn’t happen here. However, Wilkerson did end up getting into a tangle with his competitor, Cruz Pedregon.

In fact, Wilkerson’s car literally ends up tangled up in Pedregon’s parachute after the two end up colliding in the process. Fortunately, it doesn’t look like the collision was as hard as it could’ve been as both competitors ended up walking away in perfect health.