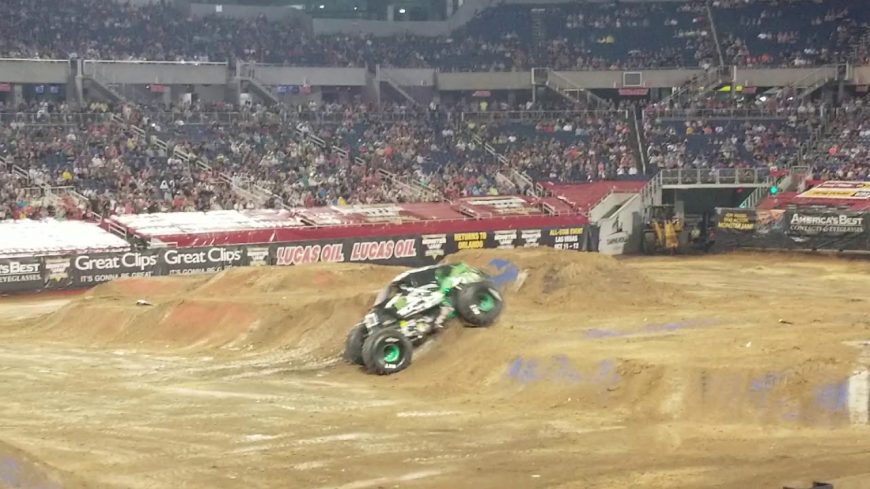 When it comes to the folks behind the wheel of the trucks at Monster Jam, some really know how to put on a show. These drivers aren’t just piloting massive trucks. The plot twist is that a lot of them look like they absolutely defy gravity. No matter how big or heavy some of these things are, they’re thrown around and it looks almost effortless sometimes.

We know that it’s something that requires endless practice, though. There are definitely situations where we wonder exactly how the driver learned to do what they just pulled off. It’s like real-world physics are thrown out the window. These are the situations that keep on bringing the fans back and leave jaws on the floor.

This time, though, we catch up with a freestyle that does it yet again! This thing might be bodied like a van but it performs like a jacked up racing machine. This is seriously some of the biggest air that we’ve seen out of a monster truck. Some of these bumps had to hurt! After each and every launch, the truck continues on, seeming to not skip a beat before popping back up and throttling down. With every moment, this display just keeps on getting more unhinged. The truck has a way of cranking up the adrenaline as it goes on. There’s no telling where something like this is going to end up! Just when we thought we saw it all, something will pop out of left field and really throw some shock factor in the mix.

By following along below, we get a ride along with this display for ourselves. Seeing is truly believing. There’s something about a massive truck soaring through the air that’s hard to ignore. LeDuc really did a number on this course in his Monster Energy sponsored ride!