How Tough is a Toyota? Crushed By A Tree But Still Driving Home! 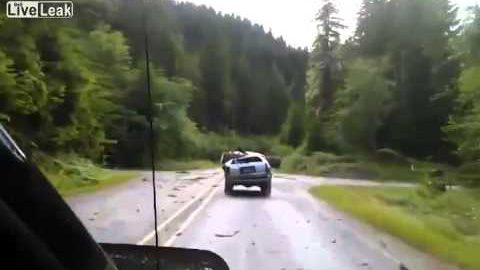 For everybody who has had a variety of cars, they could probably pick out their most reliable. It really seems like some vehicles are more finicky than others. Some can really begin to nickel and dime the owner until they decide to just give up on the vehicle. On the other hand, though, there are cars and trucks where the odometer just keeps on rolling. No matter how many miles are logged on this ride, it just won’t stop! These kinds of vehicles might even be able to stand up to some abuse over their lifetimes without skipping a beat.

This time, we check in with a vehicle that we would think the owner would classify as pretty reliable. As it turned out, the owner of this Toyota 4Runner got themselves into a pretty interesting predicament. Luckily, they weren’t injured when a tree fell on the SUV. However, they did decide to keep on driving even with the top completely crushed in.

After cutting into the tree and getting rid of the heavy parts, the Toyota would just keep on trucking. It even looks like they left the center section of the tree implanted into the roof that it was now fused with.

By following along with the video below, we get to hear a little bit more about this story and how this Toyota just kept on moving forward. I’m not sure that there are too many vehicles that could be smashed by a sizable tree like this and move forward after-the-fact. Sure, this one took a little bit of resilience from the owners of the 4Runner. However, we can’t help but be impressed by the mechanical reliability of this Toyota, even after being destroyed. This is a story that will live on with these folks for the rest of their lives!