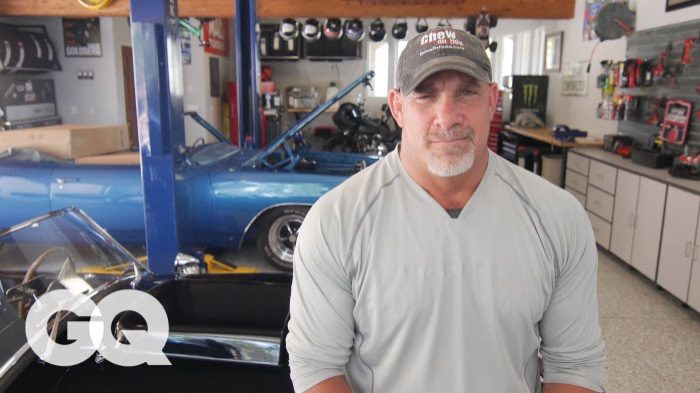 When it comes to celebrities that are also known for their dabbling in the world of automobiles, former wrestler and ex-professional football player, Bill Goldberg, definitely has to be one of those figures that is among the most prominent, up there in the ranks with names like Jay Leno and Tim Allen! Heck, Golberg has even been known for hosting car shows like Bullrun on television.

Now, you might see him out there promoting various brands but when it comes down to it, what is in this career tough guy’s garage? I’m sure that after seeing his stage persona, that you might have some sort of a guess as to what is behind those doors but this time, we head inside to check out what Goldberg is really wheeling!

From the get-go, we have the opportunity to check out a car that Goldberg says he has had for an incredibly long time in his 1968 Plymouth GTX convertible, his first muscle car that he claims is a perpetual restoration in progress. From there, we get to see a whole other collection of machines that you’re going to have to peel your eyes and see for yourself. The range is quite impressive as he takes us from car to car and even a little bit of a truck twist, giving us the rundown of what each one is about and why it’s special to him along with what the plans are with all of the vehicles if any should exist.

Follow along for yourself down the video below as GQ takes the opportunity to see Bill Goldberg’s octane filled side and after getting the chance to wrap your mind around his entire collection, be sure to tell us what you think of all of the pieces that make up this impressive puzzle of cars! If you could picture Goldberg driving around in one machine that wasn’t pictured here, what would that machine be?