With a gearhead, you never know where it’s going to stop. Yeah, we get that ...

With a gearhead, you never know where it’s going to stop. Yeah, we get that people do crazy things sometimes to their automobiles but it even goes beyond that. There is simply no limit to what vessel somebody is going to make go fast, whether it has wheels or not. Sometimes, it’s the most obscure and out of left field things that people are putting effort into in order to make them fun. This time, we really get an extreme example of that as, well, you’re going have to see it to believe it.

In this one, the goal might seem simple but at the end of the day, the engineering that has to go into making this come to life is rather complex. It all starts out with a child’s toy, you know, one of those small plastic vehicles that kids will be able to roll around on using their feet. However, a foot-propelled vehicle would be out of the question once these guys got done with it. Now, if you’ve ever worked on any type of car or truck, you probably understand that this isn’t just something that you can slap a motor in and go but instead, you have to create a whole substructure for the powerplant to set on so that said power can make it to the ground.

By dialing yourself into the video below, you’ll be able to see how it all works as the toy car comes together with its new custom frame and chainsaw engine that allows it to be moved on its own. I’m not sure this is necessarily something that you would want to give to a child, at the end of the day, however, we think that it’s actually a pretty cool piece of work that is the result of a lot of hard though and just the right touch of ingenuity to make it all come together.

Building A Smart Car Wheelie Machine Is One Whacky Transformation 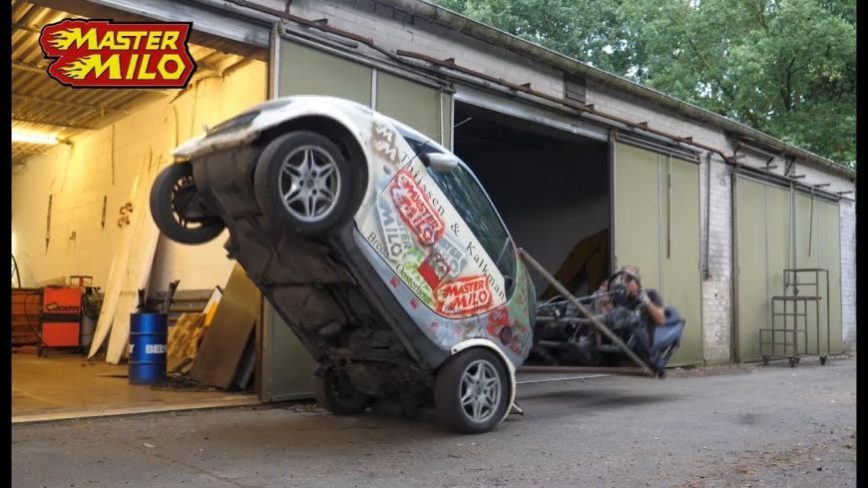