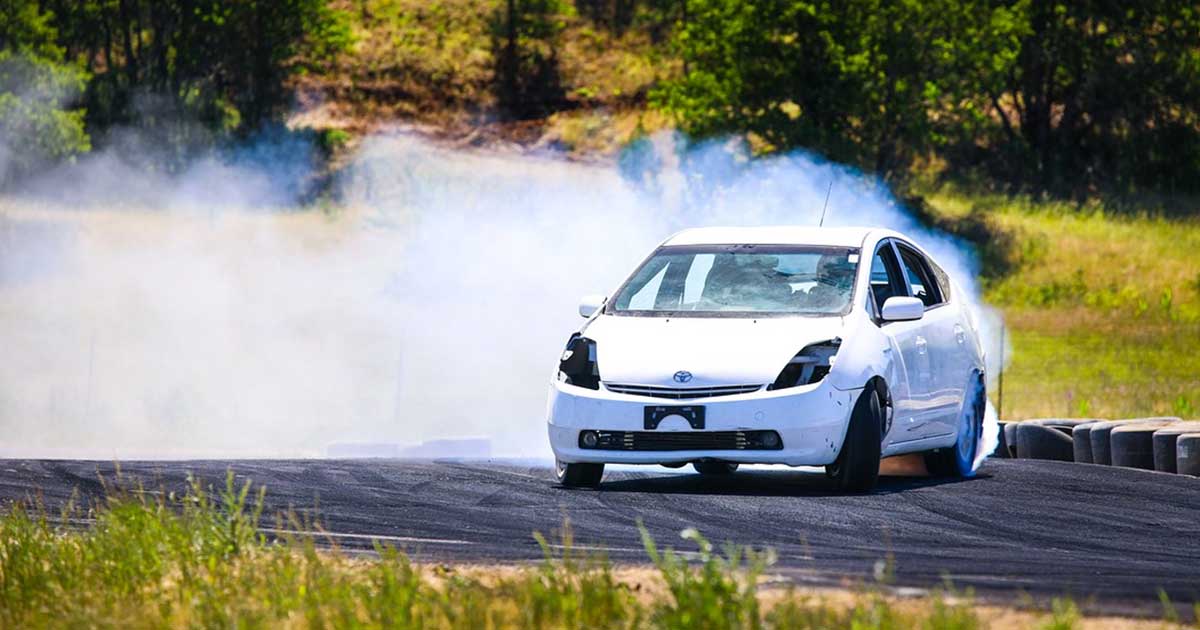 The Toyota Prius is probably the most boring car ever invented. We’re not hating, in fact, we have to give it props. The car might not be fast or stylish but it’s awesome at what it does. It provides an economical method of transportation for someone who doesn’t want to spend their money on gas. Well, it does that for most folks. If we ask drifter, Kasey Eastman, what he thinks of the Prius, he’d have a whole different opinion.

When Eastman saw one particular Prius, he couldn’t help but picture it going sideways. The $250 shell was a good jumping off point for his perfect drift build. He got to work, sourcing all of the parts that he would need before doing some fabrication to make it all work together.

In order to facilitate his goal, Kasey utilized a 2.5L turbocharged Toyota 1JZ-GTE VVTi. The engine wouldn’t fit as is, but with a little bit of know-how with fabrication, he made it work.

When throwing in a Ford 8.8 rear end in the mix and suspension components pulled from the likes of the Toyota Cressida and AE86 Corolla, we end with a proper drifting machine. This thing is sure to turn heads as it’s slung sideways. If there’s one situation that it’s hard to picture such a car in, it would be drifting. Not only are these things normally FWD but it doesn’t take an engineer to discover that they make very little horsepower. This time, though, that’s simply not the case.

It’s not often we see a Prius rolling like this! Check out the video below to see the monster for yourself! This thing is truly one of a kind creation. We have to warn you, though, because it might take your brain a moment to adjust to what it’s seeing. BigKleib34

« Donkey Gets Sued for Chewing on McLaren 650s, Causing $6k+ in Damages