Toyota’s President Shows Off His Bitter Side, Sends Shots at Tesla During Presentation 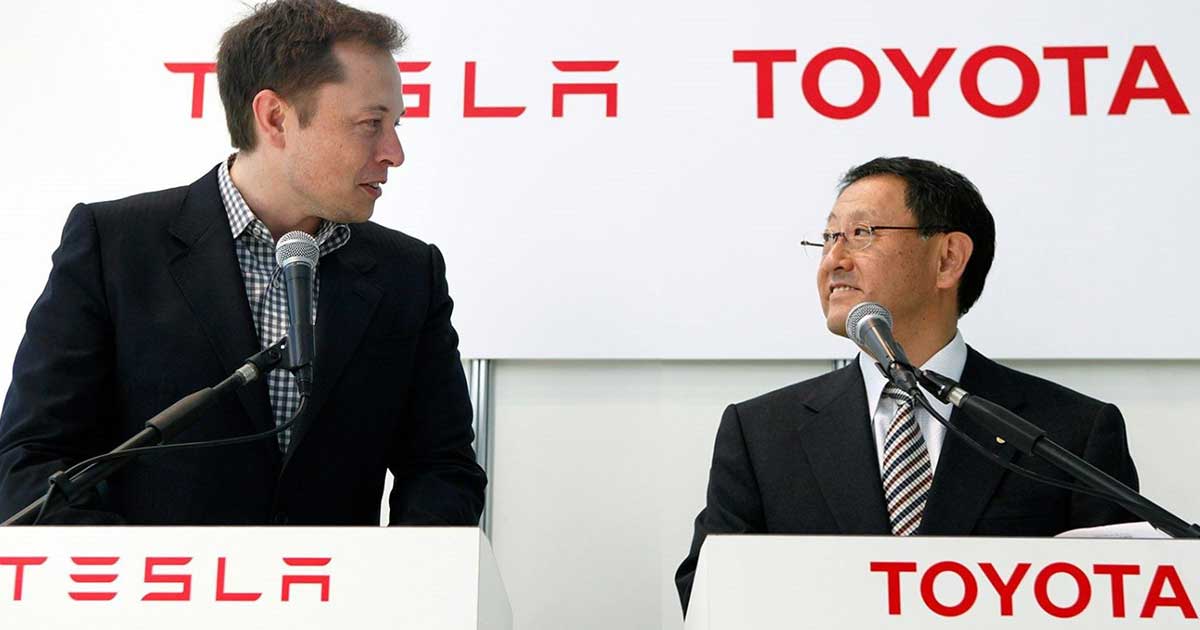 Nothing like a little bit of a feud to give those ratings a boost.

Apparently, Toyota’s President, Akio Toyoda, showed off his bitter side during a presentation on Friday, November 6 when he made a couple of comments about electric vehicle producer, Tesla. Despite Tesla rocketing up the charts to become the most valuable automaker, doubling Toyota’s market cap (second most valuable, currently) and then some, Akio Toyoda seems to imply that Tesla is full of smoke, mirrors, and potentially empty promises.

We’re not going to lie, it would be hard to not be bitter after selling a major stake in Tesla. Elecktrek reports that Toyota invested $50 million in a stake in Tesla which they sold in 2017. It is said that they made good money on the transaction. Hindsight is 2020 but if they held the shares, they could have been worth some 600% more. For the mathematically challenged, that’s $300 million forfeited by pulling out early.

Back to the spicy comments, though. During this presentation, Elecktrek quoted Toyoda saying:

“Tesla says that their recipe will be the standard in the future, but what Toyota has is a real kitchen and a real chef. We are losing when it comes to the share price, but when it comes to products, we have a full menu that will be chosen by customers.”

“They aren’t really making something that’s real, people are just buying the recipe. We have the kitchen and chef, and we make real food.”

Continuing with the obscure food analogies, Toyoda claimed that Toyota has a “Full menu,” referring to its wide selection of cars. Naturally, as a company that has only been mass producing vehicles for a little over a decade, that’s something that Tesla is still working on.

Basically, Toyoda seems to insist that Tesla is full of ideas and he doesn’t seem optimistic that the brand will be able to carry out the objectives if there is no “Kitchen” for the “Chef.” Perhaps these comments need a little clarifying but it certainly sounds like a major callout aimed directly at Tesla.

Another noteworthy takeaway here is that big companies don’t normally swing down. When we see comparative advertising, a company like Apple isn’t likely to talk about a competitor unless there is a real threat to their business. Otherwise, why give them the limelight?

When it comes to CEO smack talk, we would guess that Elon Musk would be at the helm. However, it looks like Toyota is taking a page out of the playbook of their target here. It’s not exactly clear if Toyoda meant the comments to be malicious or not. We don’t think that Musk will take too kindly to basically being called “Little brother,” though.

Musk has yet to respond.