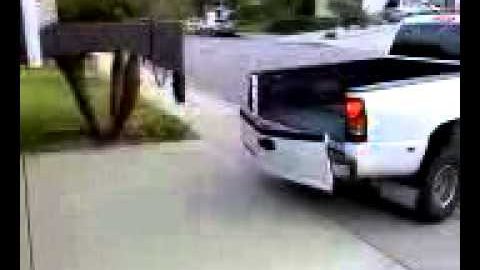 When we’re talking about trailering your ride, there are a lot of factors to pay attention to. If you don’t figure out how to get everything just right, you’re probably going to have a bad time. This time, we check in with someone trying to hook up a fifth wheel who looks like they need another set of eyes on the action. As it sits, he’s probably having a pretty bad time as he did a pretty good job of tearing up the back of his Chevrolet Silverado. As it turns out, you actually need to have the trailer fastened down before you start to roll or else there are some pretty ugly things that can unfold.

Instead of a smooth transition, we watch in as the trailer stays put when the truck rolls away, causing some big time damage. We’re pretty sure he’s going to reget that one! All we can do as watch as he pulls away and the rear tailgate comes down with a bang as the driver managed to blunder the hookup and ends up doing some big time damage. That one is probably going to cost a couple of bucks to fix the right way, that’s for sure! There’s no way that he’s going to hook up again without double checking to make sure that everything is hooked up properly!

Check out the video below that takes us on the scene of this incident that just happened so quickly that nothing could have been done to prevent it once the ball was rolling! I guess that he’s just going to have to write this one up to “you live and you learn” because there’s nothing else to do now except assess the damage and get to fixing it. That’s definitely a bump that had to hurt the ego, though!