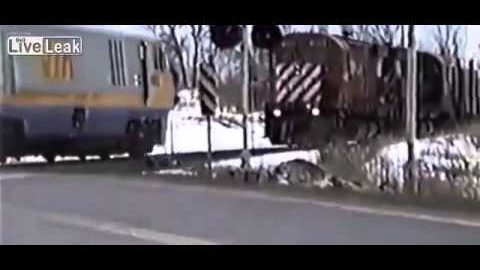 If you are at all familiar with trains, you know that these machines are incredibly heavy and don’t easily stop. With this weight comes an inability to slow down that has trains colliding with lots of things as you will see in various videos spread throughout the internet. This time, we check out a situation that has a train operator who notices such a scenario is unfolding right in front of them and decides that he’s going to do whatever he can to not absorb the hurt from that collision. Therefore, instead of hanging out in the train and waiting for it to become one with the train that is stopped on the tracks in front of it, he decides to jump out while the vehicle is moving!

As the train began to somewhat slow, it might have seemed like a good idea at the time, but as the video continues on, we begin to see that maybe he acted a little bit prematurely. You see, while trains are tough to get slowed down, it’s certainly not impossible and when the train that he was in did begin to slow down and the one in front of it also began to move, the collision was completely avoided. He probably felt slightly embarrassed after he bailed out and then the crash didn’t even happen in the first place and definitely will never be living this one down from his coworkers. Oh well, I guess that you could say that it’s better safe than sorry in a situation like this.

Check out the video down below that puts you on the scene of this potential collision that came incredibly close to happening but just missed by a hair. Thankfully, some quick maneuvering at the last minute saved lots of damage and potential injury from going down. Even though nothing actually did happen here, you would venture to think that somebody in the chain of workers is getting yelled at after this close of a call.