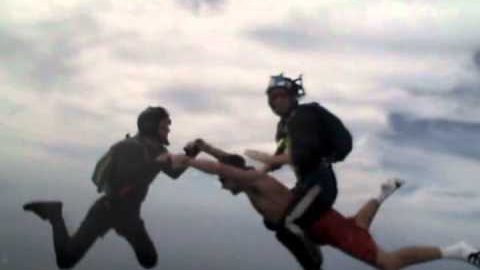 His recent trio of record-smashing motorcycle jumps in Vegas has led to a case of “Pastrana on the brain” here in the Speed Society offices. Since watching him pull off the three Evel Knievel-esque stunts, we’ve spent a lot of time discussing our favorite Pastrana stunts over the years.

Since he was one of the founding fathers – at the ripe old age of fourteen – of the Freestyle Motocross as a sport and one of the most innovative and prolific athletes in the sport’s history, we’ve had plenty to talk about staying inside the FMX box. However, Pastrana doesn’t stay inside that box, or any box for that matter, taking his penchant for innovation to places never before seen.

One stunt that came up more than a couple of times is this one that will likely go down as one of his most dangerous, but thrilling, stunts ever. Taking the concept of jumping to dizzying new heights, Pastrana decided to take up skydiving, only without one very important thing: a parachute.

That’s right, a few years back, Travis actually stepped to the door of a plane, chugged a Red Bull, and jumped. The problem is, he was wearing nothing more than a pair of shorts and shoes. From several thousand feet up, you have one of the top extreme sports athletes in the world hurtling toward the earth at a high rate of speed and no way to slow his descent.

Of course, Pastrana had a plan and it was executed to perfection. Jumping with him, a pair of skydivers – these two remembering to grab their chutes – fall alongside Travis as he does a couple of flips during his freefall. Then, when the time is right, one of the divers swoops in and straps himself to Travis, attaching himself and his parachute to the chuteless jumper. A few seconds later, he yanks the ripcord and just like that, the two are floating slowly toward the ground below.

« Dad Uses Backpack Blower to Propel Toddler Around on Tricycle!