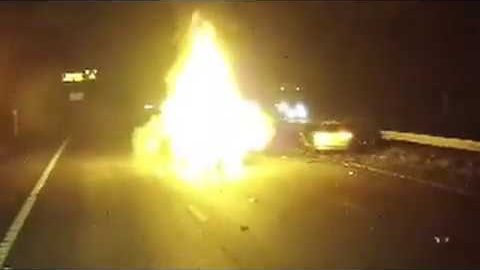 It’s not every day that somebody gets to become a real-life hero. In a scene on January 17, we would see a truck driver step into that role in Leicestershire, England.

As the scene unfolded incredibly quickly, the truck driver would act fast. John Rastrick’s dashcam was rolling as he was simply driving down the highway. All of a sudden, though, an accident would unfold in front of him. This wasn’t just an accident where the cars would come to rest. Instead, one of the cars would end up catching on fire.

Rastrick would act fast, hopping from his truck and running up to the burning car to pull out its occupant. The fire was small when he started. However, by the time the person was removed, the entire car had been engulfed in flames. The entire situation from accident to the car being completely swallowed by fire happened in about 90 seconds. In other words, if this truck driver didn’t act so selflessly, there’s a good chance that the person inside of the car wouldn’t have made it.

The unnamed truck driver commented, “I saw the car being hit from behind the car exploded in front of my truck I stopped my truck ran up to the car opened the drivers door the whole of the inside of the car was engulfed in flames everything was burning in the driving seat was a semi-conscious young woman I struggled with the seat belt to get it off the pulled her out within seconds the whole thing went up in flames. The woman sustained a brain injury and was in the hospital for two weeks and has now made a recovery.”

It’s really hard to say how we would act in a situation like this until it’s in front of us. We get a feeling that a lot of people wouldn’t have the courage to run up to that car and the selflessness to try and pull out the occupant. We have to commend John Rastrick for going above and beyond in an act that had no purpose other than helping somebody else.