Truck Drives Driving with Boom and Basket Up

Truck Drives Driving with Boom and Basket Up

If there is one thing that you don’t want to do with a bucket truck like this, ...

If there is one thing that you don’t want to do with a bucket truck like this, it would be leaving the bucket up while you’re driving. I’m not really sure how one could manage to hop behind the wheel and fail to notice the giant stalk holding up the basket from the back of the truck but this guy did.

In this one, we follow along with the truck from behind when someone pulled out their camera and got to filming as the incredibly tall and massive ride rolls down the highway, dipping under signs with a very slim margin that stands between the truck and complete disaster.

After watching this one, it really leads you to wonder why someone wouldn’t pull up beside the truck and try to alert the driver that he was about to completely destroy his ride because of the lack of attention to detail but thankfully, at least in this video, it doesn’t look like he did any damage.

Check out the clip below as this bucket dips below signs by mere inches, giving you a nervous feeling every time that the truck rolls up to another sign and dodges out of the way. This video is enough to put you on edge over and over again as you fear for the worst here! 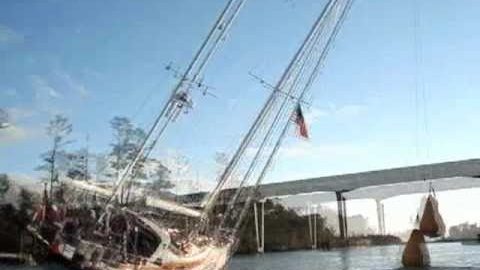