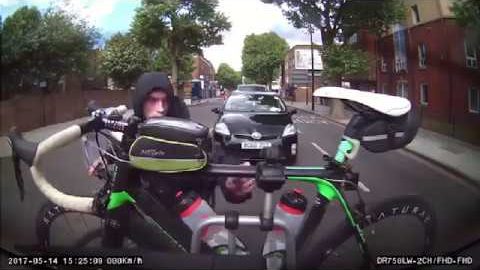 Sometimes, when you look at the situation, you really have to wonder what’s going through someone’s head. Personally, I couldn’t fathom trying to steal anything from someone else let alone steal one of their belongings boldly, right in front of their face in broad daylight. This time, we catch up with a rear-facing dash cam video that really takes the cake on criminals that have balls of steel for one reason or another and that most certainly isn’t something that we are proclaiming to be a good thing. This video is a real head-scratcher at the end of the day.

For one reason or another, the man seen on the bicycle here really had his eye on another set of wheels, a race bike that was hanging off of the back of a car in traffic on a typical bicycle rack. However, instead of using his own money to go buy his own, he decided that he would try to snatch the bike off of the rack. After multiple tries and fails, I take it this guy just ended up looking like a big enough idiot that he gave up on the effort altogether but watching this one is really enough to make you cringe inside that he tried to do this at all.

Follow along with the video below that will put you on the scene of this truly pathetic display that has someone trying to chase down something that’s not their and failing epically. It certainly isn’t every day that you see something like this going down and you can’t help but keep your sights fixated on this man as he attempts to pull off a bold display of thievery right in broad daylight. I guess that there are some people out there who just don’t get what it’s like to go out there and work hard for what you want.