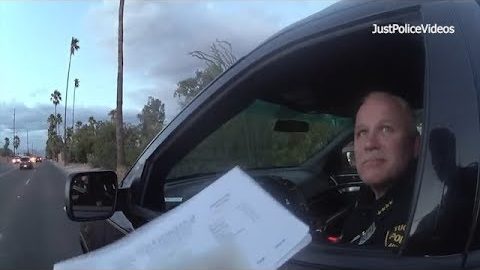 Sometimes, it might make for an awkward encounter, but even those who enforce traffic laws are human and that humanity slides over to their ability to drive, meaning that sometimes they fail to follow all of the regulations properly. Even for the police chief, though, if you end up running a red light, you aren’t above being pulled over and this situation proves just that as an officer ends up encountering a traffic stop that he probably never expected to happen when he came into work on this day.

It is one, we stop in on quite the awkward encounter when said officer decides to pull over a vehicle that was carrying his superior. The body camera is rolling as the officer pulled over the chief of police and it seems to be something that neither one of these individuals wants to be involved in. As the chief thanks for the officer for doing his diligence and making sure that the law is upheld, the comments section of the video sensed a slight undertone of “Do you want to be looking for a new job next week?” In all seriousness, though, as this was probably a new situation for all parties involved, they probably didn’t quite know what to expect here.

If you follow down in the video below, you will ride along with the situation for yourself as this one turns from a normal traffic stop to one with a little bit of a twist. As a police officer, it has to take a little bit of brass in order to pull over your boss and even more courage to ask him for his license and registration but that’s exactly what happened here and it definitely created quite the interesting piece of content for us to chew on. If you were the officer in this case, what would you have done?