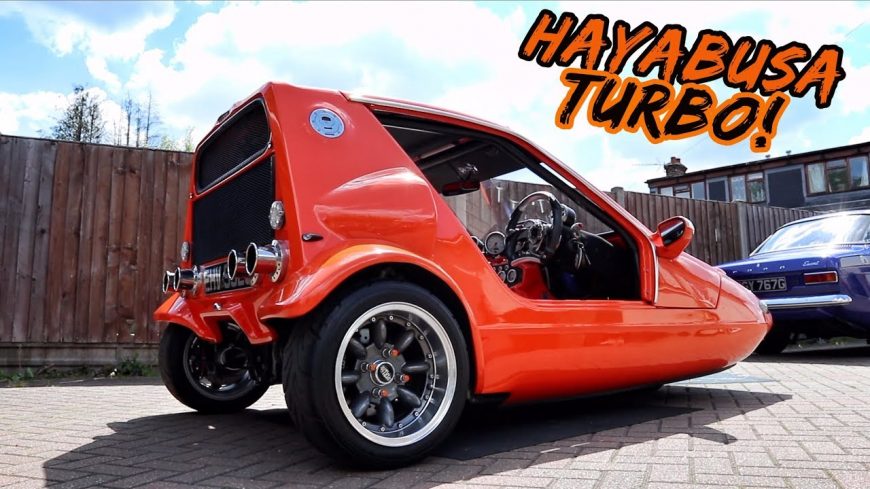 In the scheme of all of the custom machines out there, we really see some crazy creations. Don’t get us wrong, there are lots of tried-and-true combinations that are pretty clean. However, what really demands attention is something off-the-wall. If there’s a setup that somebody can’t exactly pinpoint just by looking at it, they’ll be destined to dig in deeper for more. When creativity is unleashed on an automotive canvas, things can get incredibly interesting. This time, we’re striving to dig into one of the most unique machines that we think we’ve ever spotted.

Essentially, the platform that stars here is a three-wheeled car. The current owner bought the vehicle and kept some of the bones the same. However, he does say that he has done quite a bit of overhauling. In fact, most components on this wacky three-wheeler have been touched up in some way, shape, or form. This includes a built Hayabusa engine that cranks out right around 300 hp. In a lightweight platform like this one, it pretty much guarantees that the end product is going to fly. In addition to being able to perform, we would think that this machine also gets more than its fair share of looks.

By following along with the video below, we get to tune into one of the most obscure vehicles we’ve ever seen. However, on the same note, it certainly has that X-factor that makes us want to take a ride. With lots of fabrication and attention to detail, eventually, this three-wheeler gets to a place that we just have to admire. By following along with the video below from Officially Gassed, we get up close and personal. These guys really dig into how such a crazy creation came to be. One can’t help but admire the originality shown off here!

« The Art of Precision Laser Cutting is Oddly Satisfying to Watch