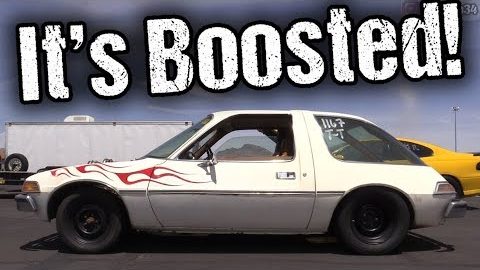 At this point in time, the swap has become a little bit divisive, honestly. It’s really become something that folks will either love or hate. Now, we’re sure that there’s a lot of people somewhere the middle of that spectrum. However, there is quite a group of people who really swear by sticking these engines in everything. On the other hand, there are those who absolutely hate them because of how many of them there are. We’re just going to ignore the latter, though. We don’t need that negative energy in our lives!

How can somebody look at a vehicle like this AMC Pacer, though, and not get a kick out of it? Just the concept that somebody wanted to take such a car and make it go fast is exciting to the true enthusiast within us all.

For most people, when they look at a pacer, they find a car that never really caught on for the masses. However, the machines has a cult following has really carried through the years. These days, there are Pacer enthusiasts who swear by the platform. I’m not quite sure how many of those enthusiasts would think of LS swapping their car, though. We’re glad that at least one did, though!

This time, we catch up with the man who goes by the name of Dick Hamm. After shoving a pair of turbos and an LS engine into the engine bay of his Pacer, it was time to go to work!

By following along with the BigKleib34 video below, we’re able to catch up with the machine that is chasing down quite the pass on the drag strip. I’m sure that when they originally put this thing together, nobody saw it ending up in a place like this. It looks like there are still just a couple of kinks to iron out but every good project has those! As of now, we absolutely are loving the progress that this car is making. It seems like an absolute blast to be behind the wheel of.

« How Can You Start Your Own Luxury Rental Car Company?