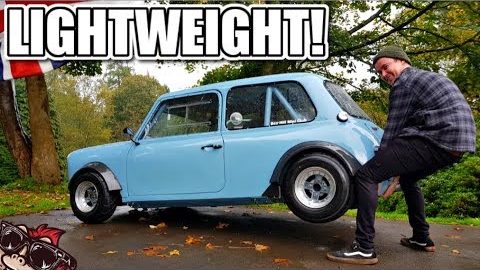 You know what they say, good things come in small packages. While there is a certain appeal to a car that’s big, shining, and has lots of displacement under the hood, this time, we check out something that comes in a little bit smaller package and really looks to be just as much fun as something with more power if not more fun! The fact that this Mini Cooper weighs almost nothing is probably a major factor that really brings it life, flexing its muscle with all of its might and giving those on board the time of their life. If I could fit, I would probably have a blast with this thing as well but at 6’5″, I don’t know if that’s exactly an option.

In this one, we ride along with the car, getting down and dirty with the machine as this old school Cooper has received the turbocharger treatment, picking up the power a little bit with a car that weighs essentially nothing when compared to others on the streets these days. The older machine is weightless to begin with then when you start to factor in things like the idea that there isn’t much interior to go around, you can get a real sense of how this thing is basically a go cart that’s bursting at the seams and ready to get played with!

If you follow along with the video below, you’ll be taken along for the joy ride in this car that shows you exactly what it’s capable of. If there’s one thing that we have definitely learned it’s to not underestimate the ability of a car that doesn’t weigh anything. Sure, it might not make the most horsepower in the world but with that power to weight ratio being a big motivating factor in how fast something is able to go, it doesn’t really need all that much power to get the wheels on this thing spinning furiously.

« How TO Remove Large Dents on your Truck!