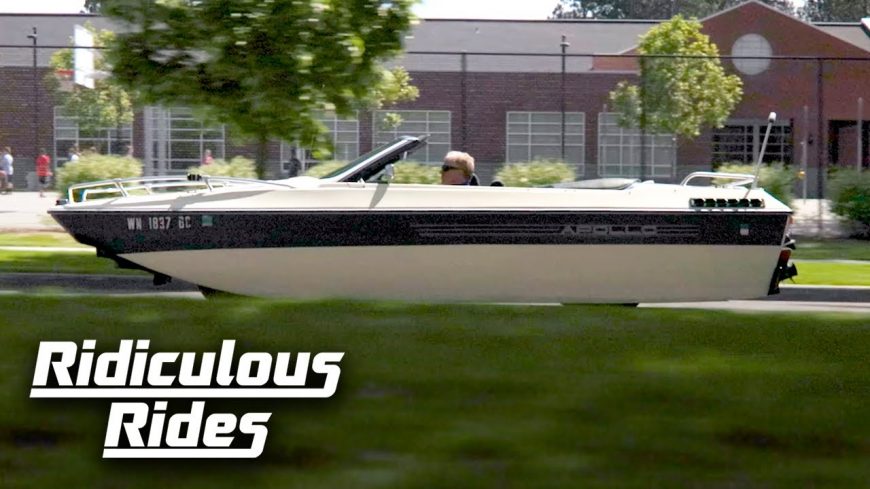 Sometimes, we find ourselves running into ideas that can be a little bit difficult to explain. In terms of these unique ideas, perhaps one of the most outrageous might just be a little something that goes by the name of “La Boata” from Spokane, Washington.

I guess the best way to describe this thing is that somebody wanted to drive their boat down the highway and with the creation, that’s exactly what they would be able to accomplish. We’re told that the end product, not surprisingly, actually ends up drawing a little bit more than its fair share of attention. It’s not surprising when we consider the fact that there’s probably nothing else on the roadways that looks exactly like this crazy creation.

One of the surprising things about this fusion of different vehicles is that it wasn’t even all that expensive to create. Some might look at this thing and think that it took quite a bit of engineering to get done which definitely sounds expensive. However, at the end of the day, the materials were nothing more than a $100 boat fused together with a $600 Chrysler LeBaron. By checking out the video below, we tune in with this monster of a fusion and find something incredibly different. In fact, its creator says that it wasn’t all that long of a process to accomplish the finished product. Instead, from start to finish, everything took all of 3 days in total.

Oh yeah, and last but not least, if you’re expecting this thing to float, we think that you might be disappointed a little bit. However, to make up for it, the owner says that it’s capable of up to around 100 mph or so on the highway, not that we’re sure we would do that on a regular basis with the La Boata.