Twin 91MM Turbo Viper! Runs an Insane 227mph in the Half Mile 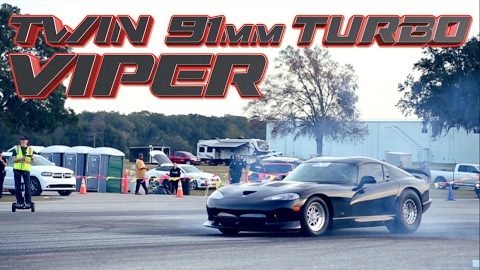 When it comes to drag racing, there’s a good chance that Sal Patel is a name that you’ve heard before. His famed Dodge Viper has been known for being a killer on the drag strip, having held the quarter mile IRS record and blasted its way into the hearts of many but this time, Sal is on a different mission.

Recently, the slick black Viper has been seen on the track at half mile events, attempting to make the jump from 6-second quarter mile passes to see what can be accomplished in the half mile with all of that power and a little bit different setup. To sum it up in just a few words: he’s off to an amazing start.

This time, we follow Sal down to the WannaGoFast half mile event in Ocala, Florida with the crew over at That Racing Channel as they showcase this mean Mopar blasting down the track and taking home a half mile world record, managing 227mph, becoming the fastest RWD car to ever do it!

Check out the video below that showcases the journey as this twin 91mm car blasts down the track and finds its way into the record books! It’s going to be a blast to see what the rest of 2017 holds for this black beauty. There’s no getting around how much of a showstopper this car really is!

« This is What a Hydraulic Press is Actually Used For