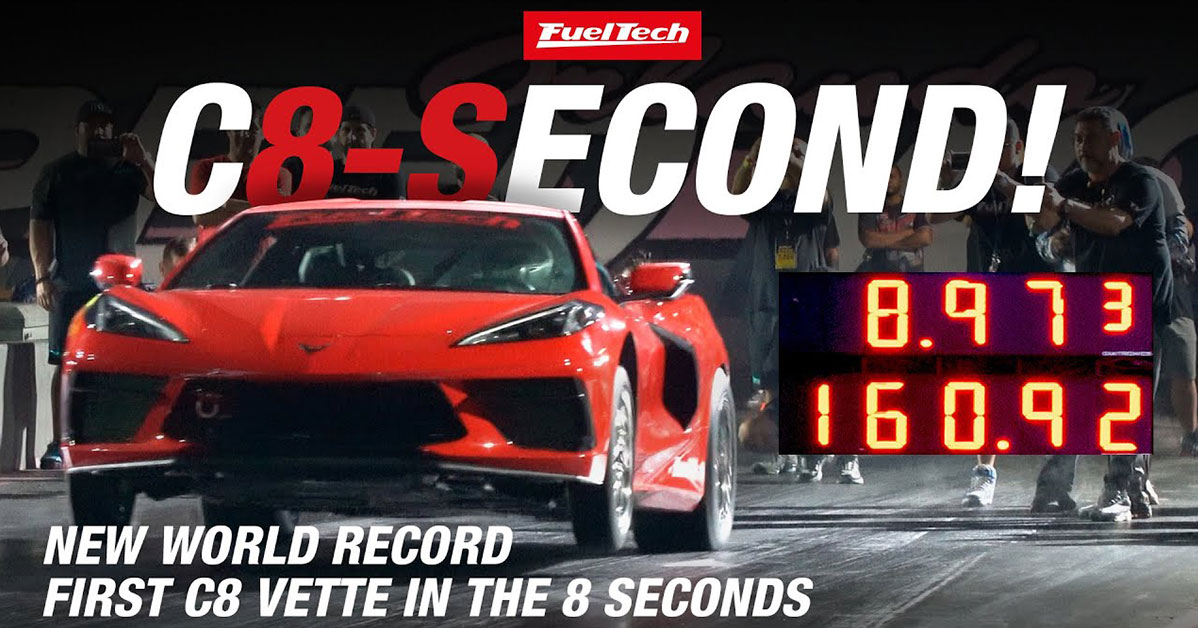 For those who have been following along with the cutting edge of C8 Corvette modification, they likely have noticed that FuelTech has been taking some pretty big steps with the shop’s C8. As the brand was one of the first to modify the mid engine Corvette, they have continuously been making the most of their efforts, stepping up from one victory to the next.

First, the machine would prove that it could get the job done on the hub dyno, creating an insane 1350 hp. From there, it was time to go to the track and back up those horsepower figures with some real world results. This is when FuelTech owner and C8 pilot, Anderson Dick, would manage to take the car down the quarter mile and into the nines but that wasn’t where the crew was stopping.

This time, FuelTech tells us “It is Official—the FuelTech C8 Corvette is the first to eclipse the 8-second zone when Anderson Dick piloted it to an 8.973 at 160.9 mph while racing at Orlando Speed World.”

They continue, “The factory PCM runs most of the vehicle systems and Anderson and his crew developed a work-around to avoid the factory-programmed torque management. A second FuelTech ECU was installed for drivetrain management, allowing the vehicle to be used in dedicated drag strip or road course applications.”

“Understandably, Anderson wouldn’t reveal too much on the drivetrain control until as they continue to develop it into a turnkey solution for the motorsports world. He did admit that a major component to the transmission performance is the ability to tune the clutch- pressure and take full advantage of the Stage 2 Dodson clutches, which utilizes 9 and 10 frictions in comparison to the OEM clutch setup with 5 and 6. The team also added a newer, taller rear tire size; 305/45/18 Mickey Thompson ET Street R drag radials help apply the power, a step up from the 325/35/18 drag radials the team ran this past summer. The new tire size allows for a longer first gear and helped knock back the ratio on the top-end for bigger speeds. The Mickey Thompson rubber is mounted on a pair of stylish Weld Laguna wheels.”

The car uses methanol fuel to help cool the incoming air and therefore doesn’t need an intercooler. The machine also features a dash of nitrous from Nitrous Outlet which not only aids in making more power but also helps further cool the air – Anderson attributes the car’s superb 60-foot times, in big part to the spray as well.

FuelTech lets us in on the fuel system, unveiling that “The Corvette features a unique dual fuel system setup that uses the factory direct injection and the stock fuel tank for primary fuel delivery. A complete second fuel system has been added to the Corvette with an Aeromotive brushless pump delivering VP Racing Fuels M1 to an independent set of fuel injectors, which are mounted in a custom sheetmetal intake manifold.”

As far as making it all come together, the machine features only the best electronics with some factory parts working hard as well. FT relays that “The team relies on the primary FT600 as a data logger to record factory sensors at a high sampling rate in addition to an assortment of FuelTech sensors. The Corvette employs two WB-O2 Nano meters that monitor the air/fuel ratio through Bosch LSU 4.2 sensors in the exhaust. Other sensors wired into the FT600 include backpressure canister, 0-150 psi pressure sensor to monitor the port fuel injection, two backpressure sensors for each turbocharger as well as turbocharger speed sensors. Anderson also added two FuelTech EGT-4 kits, which allows individual cylinder EGT monitoring for all eight cylinders, aiding in complete data collection and engine safety.”

One final aspect that FuelTech is particularly proud of is that they have gained the ability to fully control ignition timing and throttle position that enable the person behind the keyboard to really maximize the car’s potential. This is a major step forward in a car that’s all-new territory when it comes to tuning.

FuelTech has always been a premier name in automotive performance. With the C8 platform to build from they show, yet again, exactly why that is. Down below, we ride along with the first ever C8 Corvette in the 8-second quarter mile club!