TWO Bikes Street Race a Porsche and an SRT Viper!

TWO Bikes Street Race a Porsche and an SRT Viper!

When it comes to racing, one of the most interesting aspects of the competition is ...

When it comes to racing, one of the most interesting aspects of the competition is the idea that you can put literally any combination you want up against any other combo. The possibilities are truly endless as all sorts of different machines go head to head in all-out battles!

This time, we check out some action in the streets as That Racing Channel captures the action as some two-wheeled adrenaline junkies go up against a couple of folks who prefer their racing action on all fours in a Porsche and SRT Viper that are both incredibly capable competition.

In this flick, we’re given some teaser shots that will make you more than excited to see the action unfold and when the racers finally head out to do battle, we certainly aren’t disappointed as all of these machines that have been engineered for speed truly deliver with a heavy fist!

Check out the action below as the race is on to see if the four-wheeled heavyweights can make enough power to overcome motorcycles that come in at a fraction of the weight! Did these roll racing bouts end up coming out in the way that you had anticipated? 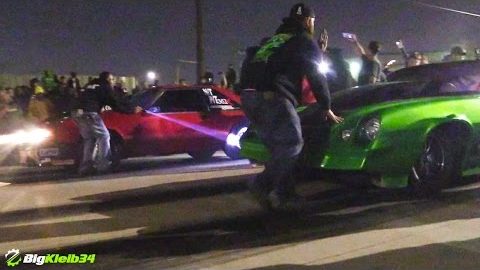