Two Stroke Bikes Throw Down in Heads Up Race on the Street!

Two Stroke Bikes Throw Down in Heads Up Race on the Street!

In the Dominican Republic, the do racing a little different than we do here. Even ...

In the Dominican Republic, the do racing a little different than we do here. Even when groups here in the states take the safer route of racing at night to keep lower the risk of being busted by the cops and having to deal with typical daytime traffic. If the locals do happen to head out during the daytime, it’s usually a quick hit and split type race to keep off the police radar as much as possible.

In the DR, though, they just shut down the road and redirect traffic around the action and get their races done while a small crowd watches on excitedly.

Today’s competitors are these two guys sitting atop their small two-stroke bikes that look like the offspring of a sport bike and a bicycle, but make no mistake, these little hotrod two wheelers are quick and rowdy doesn’t even begin to describe them. The riders get their rides warmed up and ready to throw down, then blast off down the road, front wheels high in the air as they steer by shifting their weight left and right.

Both bikes plant the wheelie bars and ride them as far as we can see, and it looks like the drivers actually make contact with each other too, giving a whole new meaning to the term “Rubbing is racing” from the classic Tom Cruise movie Days of Thunder. However, with no centerline dividing the lanes, it seems the rules about crossing are nonexistent for this race. We can’t even tell who won, and to be honest we really don’t care, this throwdown is all about the show, and these guys definitely know how to put on a show. I’m definitely going to have to find out more about these bikes, as these look like the perfect ride for cruising around the track and being able to lay the smack down on any other pit support ride I may run across. If I didn’t kill myself right off the bat, this definitely looks like it would be a hell of a lot of fun! 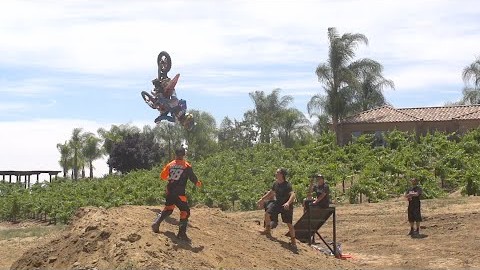