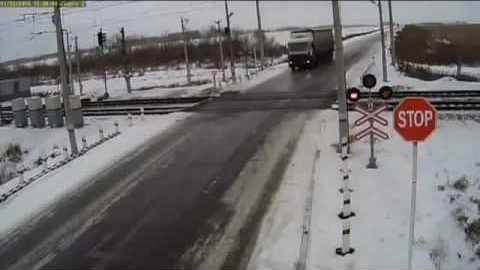 Have you ever seen one of those situations that you just sit back and cringe at, thinking that there’s no way possible that the situation could worse and that very moment, something unfolds that makes the deal at hand about ten times more sour?

Well, for this truck driver, that was precisely what we were up against as he came to a set of railroad tracks when the lights were blaring and telling him to slow down! We can’t say this with complete conviction but it does appear as if there were some inconveniently placed ice that would disallow him from doing so.

As a result, we watch as the truck slides into the train tracks but that isn’t where the adventure ends. As the truck gets clobbered by the train, I have to admit that my heart dropped but it isn’t over. Shortly after, another train running parallel in the opposite direction comes flying by and really pounds into that truck.

Security footage was able to capture the demise of this poor truck as you can see below. There is no word on the condition of the driver but hopefully, the result didn’t end up being as bad as it looked.