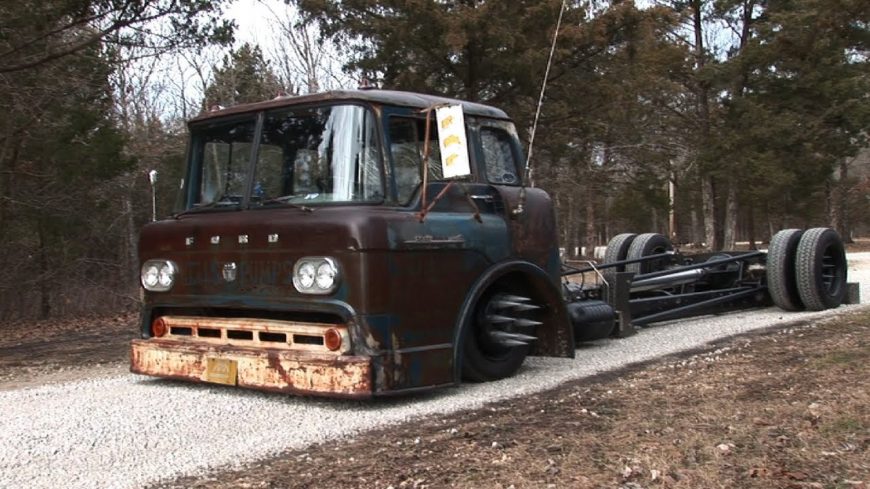 As they say, one man’s trash is another man’s treasure. When a Ford a cabover style truck would find its way to a junkyard in Missouri, it looked like it was going to be left for dead. However, when one man would spot said truck, he decided that he just absolutely had to have it and was going to show it a little bit of love. From there, it was game on, not only to bring the truck back to life to be driving on the street once again but also to throw quite a unique twist in the mix that would make this thing a custom that is certainly going to grab attention anywhere that she goes. When it comes to tow rigs, I’m not sure that there is much more drawing attention than this.

After sitting in the junkyard in Springfield, the truck had a collected quite a bit of rust. However, with a full head of steam, the new owner wouldn’t let that deter him. In fact, he even left some of the rust behind as it forms a nice patina to give the truck that rat rod sort of look. After putting it on a Topkick frame and a chassis similar to what the driver describes as similar to a modern delivery truck setup, this old truck was made new again, in a way. Sure, some of the visuals would remain original but when it comes to the parts that matter, this thing is going to be riding and driving like a dream!

The video below from the folks over Urban Hillbilly Action Videos takes a moment to dive into what exactly it is that makes this truck stand out from the pack. Not only is this thing a classic but it also has a slew of surprises that are thrown into the mix to really make it a machine that’s memorable. To top it all off, we even get a nice little burnout display that shows the truck maybe has a little bit of muscle to flex, after all.

« What Exactly Happens When You Push the “Recirculate” Button in a Car?