Underground Racing has long been the premier supercar tuner shop in the nation. If ...

Underground Racing has long been the premier supercar tuner shop in the nation. If you want to be the baddest of the badasses in the roll racing world, their twin turbo setups are quite literally the most dominant rides out there, with UGR builds breaking records and taking home wins at on-track roll racing events, half-mile and standing mile races across the nation on what seems like a weekly basis.
The first few minutes of this awesome video from That Racing Channel feature some test hits at TX2K19 showing a few UGR builds hitting some ridiculous speeds through the quarter mile. Yes the cars do get a rolling start, but the track, even when you add in the rolling start under the tower, is a quarter mile track. To see totally street legal, daily-drivable cars hitting speeds well in excess of 200 MPH in such a short distance is just insane.
But, the star of the video, at least for me, is the “Drag Lambo” and it’s starting line wheelie. For the first time, UGR has built a car exclusively built and tuned for drag racing instead of roll racing. This 3,500 horsepower monster Lamborghini has big tires all the way around that are obviously going to provide much better traction off the line than any 20”+ street tire, and even with all wheel drive, the drag version hits the tires so hard it manages to lift the first wheels several inches off the ground on launch.
Clicking off an elapsed time in the 7.9 range at over 190 MPH just proves that this thing is a quarter mile monster, and it’s safe to say, with this being UGR’s first quarter mile-specific build, it’s only going to get quicker as they learn what the car likes on the track over time.
After we check out the drag Lambo, it’s back to some more roll racing from TX2K, where UGR once again dominated the roll racing category. Of course, with cars that you can drive to the beach clicking off speeds in excess of 225 MPH in less than a half mile, what else would you expect? Credit – TRC 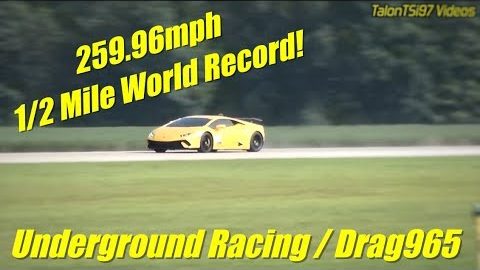