US Navy Launches New Warship Sideways Into The Water 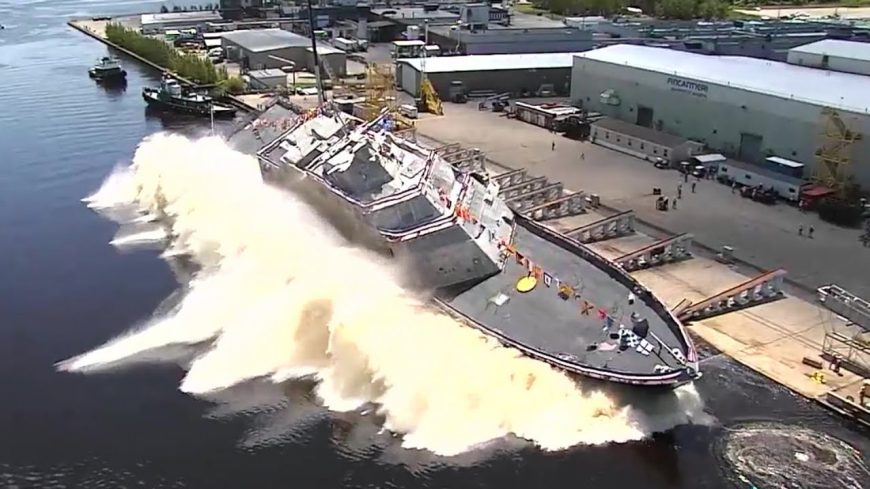 It’s always so cool to see the different ways ships are launched into the water. We’ve seen massive yachts launched from a truck and trailer, smaller vessels ramped straight out of the assembly facility, and of course, the awe-inspiring sideways launches of massive craft like the one seen in this video.

Assembled at Marinette Marine Shipyard in Marinette, Wisconsin, the US Navy’s latest Freedom-class Littoral Combat Ship, the USS Billings was recently christened and launched into the Menominee River near the entrance to Lake Michigan. Christened by its sponsor, Montana Senator Jon Tester’s wife Sharon, with a bottle of sparkling wine smashes across its bow, the USS Billings was then launched in dramatic fashion into the water.

Years of experience have taught these shipbuilders the best way to get their latest creations into the water, and clearly the Marinette Marine way is the sideways plunge. As soon as Mrs. Tester smashes the wine on the ship’s hull, a horn sounds and the launch proceeds, ending in a matter of seconds with a massive splashdown that sends a wall of water racing across the top of the river. While the launch looks to be violent and unpredictable, there’s no doubt this process has been carried out many times by the crew and they certainly knew exactly how it was going to go. The ship rocks quickly back and forth, then settles nicely into it’s upright orientation, ready to load up with the crew and head out to sea.

When the ship slips quietly though the Great Lakes and enters the northern Atlantic, it will join the rest of the Naval fleet in defending our freedoms and protecting our interests around the world as part of the most powerful military on the planet. We are proud of the might of our military and thankful for the service of all the men and woman around the world that fight to keep America the greatest nation on the planet.

« How did the Manta Ray Boating Tube Get Banned? It Just Looks So Sketchy