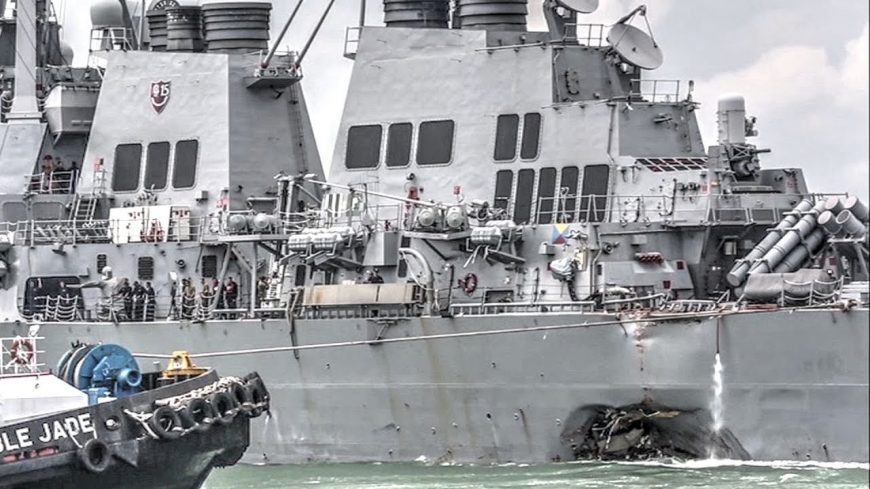 One of our Naval vessels was involved in a collision with a civilian ship, leaving five sailors injured and ten others missing in the Strait of Malacca in the South China Sea. The incident took place yesterday just off the coast of Singapore, but there has been no determination made about the the cause of the collision. It’s not believed the incident was intentional, but the top brass in the Navy aren’t ruling out any possibilities.

The collision prompted a full investigation from the Navy, an understandable reaction to the fourth such incident in Asian waters this year. Admiral Phil Davidson has been tasked with heading up the probe into this incident, which will include a comprehensive review of the training and certification procedures for American military forces deployed in Japan “to make sure that we’re doing everything we can to make them ready for operations and war fighting.”

The ship was named for the father and grandfather of US Senator John McCain, both of whom were Navy admirals. The senator who shares their name also served in the Navy where he reached the rank of captain. President Trump and Vice President Mike Pence tweeted their concerns for the missing seamen. The offering vessel, a commercial tanker traveling in one of the busiest shipping lanes in the world, collided with the McCain at 5:24 am local time. According to CNN, the merchant vessel is approximately three times the size of the McCain and would take miles to make significant changes to its course while the smaller, more maneuverable McCain should have been able to avoid it easily. However, the McCain reported a loss of steering at the time of the incident. There was damage to the other vessel, but no injuries aboard the tanker. It didn’t appear the hull was breached and there was no visible oil or fuel at the site of the collision.